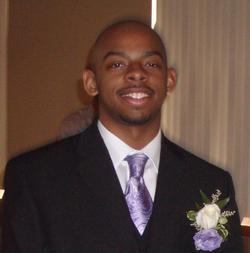 Nicole~
Think of all the love poured into him and all the love that poured out of him...he's always near...a momma knows without seeing; its felt throughout your soul.
I'm sending love and light to all of you! I'm so very sorry ... I love you, Jennifer Stanford

My condolences to the family. I worked with Ryan at CSX he will be missed.

I never knew or had the pleasure of working with brother Ryan Edwards but as a railroader I mourn his loss. I offer my sincere condolences to his family, friends and co-workers.

My deepest sympathy to you, Nicole, and to your family. I cannot begin to understand your pain. You will remain in my prayers...may God give you strength. I have wonderful memories of dear sweet Ryan. He brightened up the world.

My condolences to Brother Ryan's family & friends. I did not know him but the loss of a brother railroader affects each of us in the industry... Ed Michael, Railroad Workers United

My condolences to Angela and her family. Our thoughts and prayers are with you.

Nicole,
I am deeply saddened to hear the loss of your son Ryan. I pray that God will grant you the strength needed to get through this moment in your life. May God comfort you and your love ones

Our hearts go out to Ryan's family and friends our prayers are with you. We ask the Lord to hold you in the comfort of His caring hands and loving arms.

John, I am truly so sorry to hear of the loss of your son Ryan. In times like these, we may not understand the reasoning..and it isn't for us to know why these things occur. But, hold strong to your faith and know that God has a plan for us all! Take comfort in the knowledge that Ryan is at peace..in a far better realm! And the two of you will be reunited down the road!

Get email updates about Ryan Edwards delivered directly to your inbox.

Ryan Delend Edwards was born on October 2, 1988 in St. Louis, Missouri to the union of Nicole and John Edwards. He loved his siblings Scottie, Tyra and Joshua. He professed a hope in Christ and was baptized at an early age.Ryan graduated from Parkway North High School where he played football. In addition, due to his high academic achievements he earned the National Merit Semi-Finalist Award. Following high school, Ryan relocated to Harvey, Illinois. He attended Columbia College in Chicago. Ryan met Victoria, the love of his life, in 2007. They later married on May 22, 2010. Into this union Victoria brought with her two children, Edward and Emily whom Ryan fully embraced as his own. Together they later welcomed a son, Ryan "RJ". He loved his family tremendously. As Ryan declared many years ago at four years of age, "When I grow up, I want to be a husband and a daddy." He enjoyed spending time with Victoria and the children, traveling with them and providing for them.Throughout his career with the railroad, Ryan worked as an Intermodal operator at BNSF and as a freight train conductor at both CSX and CN. While at CSX, Ryan graduated number one from his training class. Around the yard, Ryan was seldom seen without his Cardinals' hat. He was an avid St. Louis Cardinals baseball fan! No life is ever complete without friends who have endeared and enriched our lives along the way, and such is the case with Ryan. Ryan leaves to cherish but will continue to live in our hearts; his wife Victoria, daughter Emily, sons Edward and Ryan, his parents Nicole (Russell) and John, his siblings Scottie, Tyra and Joshua, his great grandmother, grandparents, aunts, uncles, a nephew and a host of cousins and friends will all remember him fondly. Visitation Saturday August 1, 2015 from 9:30am until time of Service at 10:30am at the Salem Lutheran Church, 18400 South Ashland Ave., Homewood, IL Interment to follow at Assumption Cemetery in Glenwood, IL. Call Tews-Ryan for additional information. 708-798-5300.