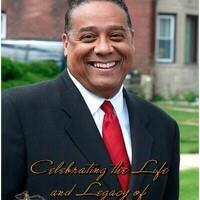 My condolences to Tiffani, Sharon and Mr. Napoleon's entire family. Not many people will leave a legacy when they transition. We are fortunate to have shared fond experiences with this Detroit Legend. Rest well and job well done.

I would like to say that the city of Detroit has truly lost a champion of justice and an advocate of the youth. May Benny rest in Power.

Condolences to Tiffani, and the Family. Benny contributed so much to the community. He will truly be missed. May he rest in Complete and Total Peace. Blessings, Strength & Prayers
Paula Hunt

Benny,
May the pure love and blessings of God cover you, your family and love ones. Rest well my friend, you were a light in the darkness.

My condolences to Tiffani and the family. God's Blessing be with all of you.

Get email updates about Sheriff Benny Napoleon delivered directly to your inbox.

THE LIFE AND LEGACY OF Benny Napoleon

ACKNOWLEDGMENT OF APPRECIATION The family of the late Benny Nelson Napoleon acknowledges, with sincere appreciation, the many comforting messages, floral tributes and other expressions of kindness evidenced at this time in thought and deeds.

Benny Nelson Napoleon was born on September 10, 1955 to Rev. Harry and Betty Napoleon (Rev. Napoleon preceded him in death). Benny and his siblings were raised in the family home on Seyburn, where Rev. Napoleon began his ministry later christened Tennessee Missionary Baptist Church. A confirmed “PK” Benny fully embraced his faith and was baptized at the young age of 11.

Benny excelled in Detroit Public Schools and turns out he was also athletic. "Skinny Benny” ran cross country and played Little League baseball with his big brother Hilton. Yet basketball ultimately became his passion. Teenage "Thin Ben”, as he later preferred to be called, played Guard for Cass Technical High School, even advancing to a championship final at Cobo Hall in 1972.

While selling shoes at Sibley's after graduation in 1973, the ever-dapper Benny encountered one of Coleman Young's mobile recruiting vans for the Detroit Police Department. He filled out an application, but didn't follow through until a recruiter tracked him down six months later. He graduated from the Academy in ‘75 and meticulously rose through the ranks enjoying a career marked by several nationally-renowned accomplishments including: supervising the investigation that prosecuted those who attacked international figure skating champion Nancy Kerrigan; apprehending 10 escapees from the Ryan Correctional Facility; and reducing violent crime in Detroit by 30% as Chief of Detroit Police.

While those accolades stand out in his lengthy 45-year career, none figures so prominently as the “Drama on Dresden" where an agile Inspector Napoleon was seen sprinting, cradling a baby he rescued, during an incident where a barricaded gunman fired over 1,500 rounds at officers. That image immortalized in print was seen nationwide!

With dogged determination he pursued a B.A. in Criminal Justice from Mercy College of Detroit and a Juris Doctor Degree from Detroit College of Law at Michigan State University. He completed some 56 courses of specialized training over his career including Secret Service Dignitary Protection and Harvard University John F. Kennedy School of Government. His honors and awards are too numerous to count. Like many heroes, he simultaneously fought crime, represented clients in court, served as Chair of the Michigan Civil Rights Commission and coached PAL basketball and baseball for the Boys and Girls Club. But, nothing compared to what he considered his most important role, father of his beloved daughter Tiffani Chanel.

Benny was amazingly devoted to his "Tiff.” Rarely seen apart, he often said “if Tiff can't go, I ain't going!” Together, Benny and Tiffani experienced his world of local and national icons; civic leaders, and a multitude of entertainers, presidents, and even Nelson Mandela. Benny and Tiff racked up millions of frequent flyer miles traveling the globe together, time he treasured especially after retiring from DPD in 2001.

He worked the next decade in the private sector as Vice President of a real estate investment firm before serving as Assistant Wayne County Executive. He also taught Criminal Justice at the University of Phoenix eagerly grooming the next wave of law enforcement professionals. Throughout all of

"Truly I tell you, Inasmuch as ve have done it unto one of the least of these my brethren,

his experiences he remained gracious to everyone he encountered, frequently saying “just call me Benny.” They in turn considered him to be kind, compassionate, giving, loyal, humble, highly skilled and a man who always kept his word.

Benny achieved his final, greatest role as leader when he was appointed Wayne County Sheriff in 2009 and enjoyed landslide elections in 2010 (partial term), 2012, 2016 and again in 2020. As Sheriff, he streamlined operations, revised methods of confinement saving taxpayers millions and catapulted the issue of mental health care and incarceration into the local and national conversation. His input into the Wayne County Criminal Justice Complex currently under construction will culminate in a safer, more effective combined campus for personnel and citizens.

With all this work, there had to be room for play for Detroit's most-beloved crime fighter. Over the years he and Tiff visited Disney World often and he even took a Grand Prix race car for a spin. But in recent years he has indulged his newest pastimes-never-ending home renovations and playing golf! He enjoyed discovering courses nationwide and even attended the Masters in Augusta. Though he was laser-focused on reducing his score, Benny enjoyed the camaraderie with golf buddies far more than a great round.

When God created our brother he made him proud and wise.

He put the light of truth and understanding in his eyes. He formed him in His image, heart faithful, smile bright

his skin a shade of evening as it passes into night. He gave him sturdy arms for lifting children in the air and knees

that weren't afraid to bend in work or play or prayer. He planned him with a passion for the role of brotherhood,

and when the Lord was finished, He was sure that it was good. With gratitude for the values you taught, the encouragement you gave,

the dreams you believed, the legacy of love you passed along, with thankfulness for the God-giving blessing you were to this family.

You can say Benny obsessed over DIY projects at home. Yes, he loved golf. But nothing compared to the time he cherished with his family, his daughter and treasured grandson Malachi. Benny was Malachi's biggest fan. He traveled near and far to watch Malachi play basketball, never missing an opportunity to be courtside. Family was first for Benny. Even as he pursued his career opportunities,

for Mayor, you always saw them and his beloved Sharon by his side

That family devotion was nearly matched by his deep commitment to the community of faith. He

visit a church or house of worship, donate to their programs and help promote faith-based initiatives - his support was inter-denominational. As Sheriff he greatly expanded the Chaplain Corps understanding the vital role faith leaders play in our neighborhoods.

Sadly, several weeks after he was diagnosed with Covid-19 in November, Benny received his wings. He fought valiantly given the tremendous care he received from the doctors and nurses constantly watching over him. His sunset commenced on December 17, 2020 with Tiffani and his family near his side.

You were a pillar of strength to our family; you loved us all as if we were your own. You stepped up when others walked away; that's just who you were. For many of us, you were our inspiration to be better and reach higher. You always dreamed big and shared those dreams with us. You were an inspiration because you through you, we saw that those dreams could become a reality. You didn't do anything to lift yourself up, but to lift up others. That's your legacy to us. You will forever be missed and loved by your Nieces and Nephews

A mother's love for her child never ends; it grows and grows and never stops, even after death. I will always love and miss you.

I just wish that I could see and talk to you one more time, but I know that you're in a better place now. See you later Papa.

Daddy My days are empty and my nights are cold, now

that God has called you home. Everyday there is a whirlwind of emotions caused by the death of my best friend. Your love, loyalty, unwavering support, dedication, protection, provision and sense of humor were unmatched. You showed me a love like no other. My only desire has been to make you proud; to make bearing the title of being my father something that you wore on your chest like a badge of honor and I am confident that I've done just that. Rest well daddy, resting assured that you've prepared me for this moment. You've instilled integrity, perseverance, empathy and tenacity deep down on the inside of me. I'm woven together with faith, self-respect and dignity. Every time I'm faced with a difficult decision, I'll ask myself, "What would daddy do?" and I know I'll never fail. I love you with every fiber of my being.

Benny You were just the BEST life had to offer and being your “other half" was a blessing! My life was enhanced beyond measure and I owe that to you. I will always cherish the years of memories we made, fondly remembering the first time you said, “Do you feel lucky?" while that meant "Get ready for a challenge," to answer your question... I always felt like the luckiest woman in the world during our time together! You made sure I knew that you loved me and those feelings will live in my heart forever. You will always remain my one and only love. - Sharon

IN LIEU OF FLOWERS, DONATIONS CAN BE MADE OUT TO: