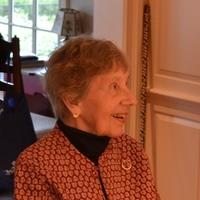 I am so sorry to hear about the families loss.may the families hearts ♥ be filled with wonderful memories of joyful times the family shared together with the dear loved one lost in death.As the family cherished a wonderful life that was well lived and loved by families and friends.my heartfelt sympathy and condolences to the families during this difficult time of grief and pain.
-Pert / LYNN

Sorry for the family's loss. The pain of losing someone in death is the most devastating pain that one can feel.may God the father comfort strengthens and soothed all those who mourn.may God sustain the families and friends during this difficult time of grief and pain.my deepest sympathy and condolences to the families.
-GP/LM

Get email updates about Shirin Bird delivered directly to your inbox.

She was born in New York City and spent the first years of her life living in Palestine before her family settled in Middlebury, Vermont where her father was a college professor. She was the daughter of the late Waldo H. and Dorothy (Peterson) Heinrichs.

Raised in Middlebury, Vermont, she was a graduate of Wellesley College and later received her master’s degree from Simmons School of Social Work.

For many years, she worked as a social worker at Mystic Valley Mental Health Center.

Shirin will be remembered for her kind heart and quick wit, and her devotion to her loving husband Fred. Shirin loved Vermont and spent much time in Middlebury, at their log cabin in Hartland and happy summers in Charlotte on Lake Champlain surrounded by her extended family and friends.  She was predeceased by her husband of 63 years, Frederick F. Bird, in 2016 and her brother, Waldo H. Heinrichs.

She is survived by her loving children, daughter Patricia Waters and her husband Richard of Concord, son David Bird of Nashua, NH, her cherished grandchildren, Andrew, Emily, Matthew and Alec Waters, her sister Mary Garner and several much-loved nieces and nephews.

A Memorial service will be scheduled at a later date.

For those who wish, memorial contributions can be made to The Carleton-Willard Village Employee Appreciation Fund, 100 Old Billerica Rd., Bedford, MA 01730.