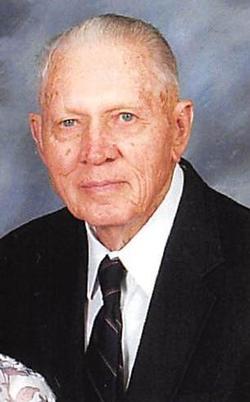 Our prayers and thoughts are with the Johnson family over the loss of Stanley. Your memory and love for him will live on in your hearts forever.
The Wood Family
Sandra and Family, Neal and Family , Ron and Family Larry and Family and Ricky

Our hearts are filled with sorrow upon hearing the news about Stan's passing. Our most sincere condolences go out to all the Johnson family.

Our thoughts and prayers are with you in your time of grief. May your memories bring you comfort.

I am so sorry for your loss. I wish I would have known him. You have much to be proud of.

Stan and Family
You are in our thoughts and prayers during this time. I know you are comforted by memories throughout a long life, well-lived.
Joe and Ruth (Jenkins) Dahlstrom

I loved Mr. Stan "Have I got a deal for you"! Miss Ada & family please accept my sincerely condolences in your time of need. May the Lord comfort you as only He can.

Our thoughts and prayers are with you and your family. We loved our cousin - he was a great guy! May Dell, Ginger and Gilbert Johnson

Stan Johnson one of the best men I ever met. We were friends for over forty years. The memories during that time were and will remain special forever. I know you and Pat are reminiscing about the great times we had together. Your birthday celebration was special, so happy I was there. Love you buddy! Ada take care....you have such a supportive family, Love to all.

Get email updates about Stanley Johnson Sr. delivered directly to your inbox.

Stanley William Johnson was born April 6, 1926 to Dewey and Ella (Molberg) Johnson, and went to be with his Heavenly Father on his 90th Birthday. Our beloved Husband, Father, Grandfather, Great Grandfather, and Uncle is looking down on us after 90 years of love and kindness shown to all who knew him. He was a long time member of The First Baptist Church in Elgin and enjoyed his Sunday school class on Sundays. Stan was born in Austin, Texas, and left home at 17 to join the Navy and served in WWII. He was on the USS Talladega, APA 208, during the invasion of Iwo Jima and participated in every major island battle as Allied forces crossed the Pacific to Japan. He earned 2 Bronze stars and many awards for meritorious service. The military was his passion and he was an honored member of the Greatest Generation and was proud of his service to his country. In 2012, he was chosen to go on an Honor Flight to see the national WWII monument in Washington, DC. After the war he came home and eventually started his own business that he ran for 33 years, Stan's Heating and Air Conditioning. Stan's is a well-known and highly honored company in the air conditioning industry. Even after "retirement" he continued to work until he was 80 years old serving his clients in the field that he loved. He was frequently assisted by his favorite helper, his wife Ada. He was preceded in death by both his parents, his brother and three sisters. Loved ones left behind are his devoted wife Ada Webb Johnson and to live the values instilled by him is his son, Stan Johnson Jr and wife Delaine of Austin, three grandchildren Eric Johnson of Houston, Byron Johnson and wife Kerri of Dallas, and Tara Adams and husband Jeff of Rockport. He has 6 beautiful great-grandchildren Cole, Luke, Molly, Sadie, Graham, and, Zane. He has many nieces and nephews that loved him very much. A visitation will be held 3:00-5:00 P.M. Sunday, April 10, 2016 Providence-Jones Family Funeral Home. A Celebration of Stanley's Life will be 10:00 A.M. Monday, April 11, 2016 First Baptist Church Elgin. Interment will follow with Military Honors at Austin Memorial Park Cemetery, Austin, TX.