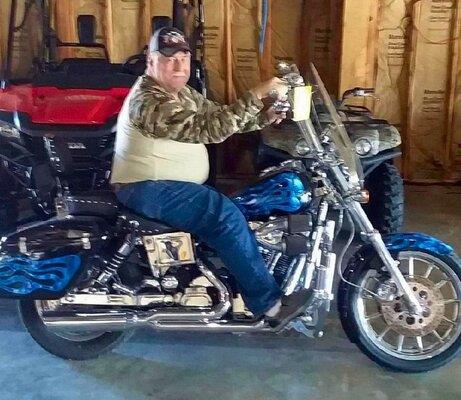 Steve broke up party i was at once. I was reclined in my car when he walked up and pecked on the window. He told us to leave and reached down and picked up my Colt 45 from the floor board and stuck it in his belt. Said, "I'll hold on to this so you dont get into trouble. You can come by the PD in the morning and pick it up". He was a good one and truely cared about the kids. He will be missed.

I just learned of Steves death. We went to high school together. I am very sorry. Tom Wheelus

Godspeed " Dad" !
I will miss you every day as we had so little time together in the grand scheme of things. You took me in as a stranger and made me family. You and I taught each other as we went , what I learned from you was Priceless. My proudest moment was when you administered the Oath and Handed me My Sawyer PD Badge , because you and the town needed help, and you knew I would be by your side when you needed me . Our adventures together will live forever in my mind,...

RIP Brother
Even though we never met in person.
I will miss our many long phone conversations. Photographs of your hunting trips, rifle builds and time spent on Gun & Game.
My sincere condolences to Marlene, and your family.
May your soul rest with our Lord.
God bless.

RIP "Bowers"! Heartfelt condolences to Marlene and all the family. I and all my family enjoyed so much Steve's quick wit but most of all was his genuineness!

Prayers go out for Stephens family. Was always proud to be a HOG member. He will be missed.

My thoughts and prayers are with you in your time of grief. It was my honor to call Steve a friend and a treasured riding buddy. Thank you for sharing him with us. He will be tremendously missed.

Steve was not only a brother in arms to me but a second father after my dad pasted he was my friend , dad . buddy . Riding partner and friend I could turn to I miss Steve for the rest of day's I will alway remember our 2019 road trip up through Arkansas and the photos we took and the late-night talk we shared till 3am. Steve my friend till we can ride again together R.I.P.

With deepest sympathy. He was an awesome person and one of a kind. He will be missed by many.

Get email updates about Stephen Bowers delivered directly to your inbox.

Stephen Beal Bowers was born on July 20, 1943, in Clarksville, Texas to Beal Vincent and Mary Virginia (Moore) Bowers. He was preceded in death by his parents and his son, William “Billy” Bowers.

Steve was a proud retired Veteran of the United States Navy. He served his Country during the Vietnam War as an Aviation Structural Mechanic. During his two tours of duty, Steve earned many badges, medals, and ribbons, including the Humanitarian Service medal, Meritorious Unit CIT (Gallantry Cross) and the Vietnam Service Medal. He married the love of his life Marlene Skinner on July 20, 1963, in Hugo, Oklahoma. Steve worked in law enforcement for many years and later began work for Choctaw Nation Housing and retired as a housing inspector. He enjoyed fishing, hunting, and riding motorcycles. Steve enjoyed gunsmithing and visiting with friends and family. He was quite a character, and they are many stories to tell by those that knew him. Steve will be missed by those who knew and loved him.