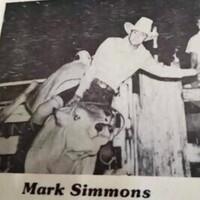 Praying for the family. He will be missed. Love you guys very much.

I'm so sorry to hear about Mark, Kathy. Grief can be so hard, but our special memories help us cope. Remembering you and your loved ones today and always. Love you Kathy

Praying your family will find comfort through this time. Mark was an old friend and will be missed.

Watching the beautiful video of Mark, it is truly a tribute to the man he was. I saw the Mark I knew from days past on family visits and saw the man that Mark grew into being. One full of God's love and the undeniable love he had for his family. I pray that Mark's family and friends find their comfort and strength in God during this difficult time. Rest in peace Cuz.

In loving memory of a wonderful friend. I will love you and miss you always. See you later Mark

We are thinking of y’all during this time. Our prayers are with each of you.

So sorry for your loss prayers be with the family

Get email updates about Stephen Simmons delivered directly to your inbox.

Stephen Mark Simmons of Poteau, Oklahoma (formerly of Heavener, Oklahoma) was born January 1, 1954 in Poteau, Oklahoma to James and Kathleen (Hornbuckle) Simmons and passed away on February 24, 2021 in Fort Smith, Arkansas at the age of 67.

The mother of his children:

Numerous nieces, nephews, cousins, and a host of friends whom loved him very much

He was preceded in death by his parents, James and Kathleen Simmons; and a son, Stephen Simmons.

Mark was a longtime resident of the area and a heavy equipment operator in construction. He was a 1972 graduate of Heavener High School and a member of Trinity Baptist Church. He loved spending time with his family and friends.  Mark will be missed by all who loved and knew him.