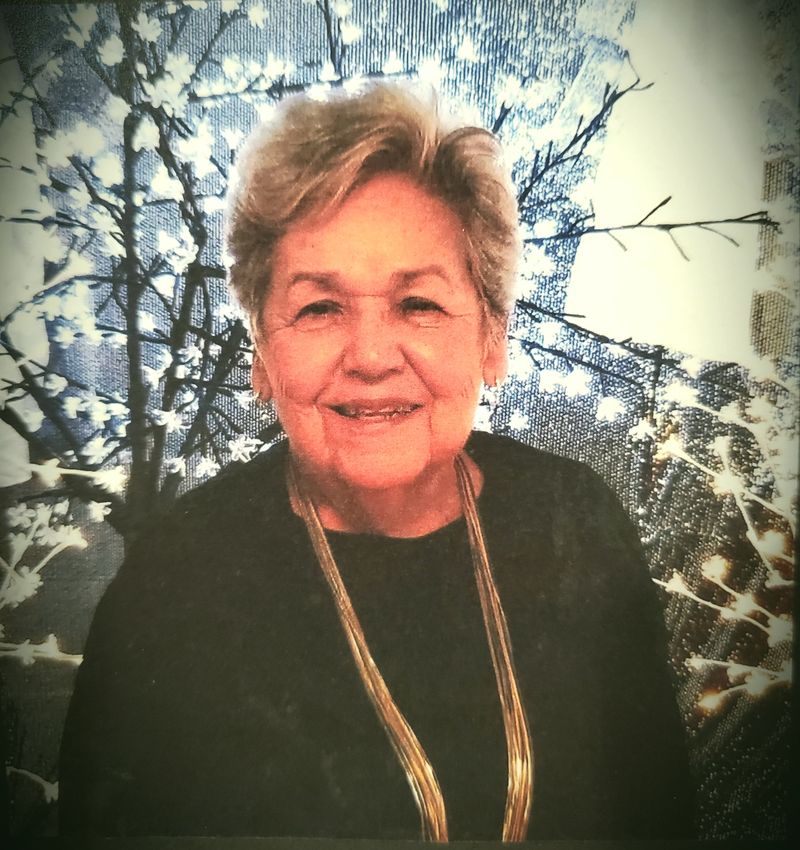 Sweet Teri! We enjoyed our wonderful visits with you the annual cookie bake. You are loved and will be missed dearly.

Teri's presence lit up a room! She was happy and fun-loving, and you could see her beautiful soul shining through her beautiful eyes and face. What an accomplished woman she was--and modest. Though she is sorely missed here on Earth, I know that she is enjoying her everlasting rest with her beloved Bob--what a comforting thought.

It was with great sadness that I learned of Teri passing away. She was a beautiful woman. So intelligent, caring, and a delight to know her. I had the good fortune to know her through the Sunshine Club these last several years. When I was elected President of the Woman’s Club of Leisure World, Teresa joined the club to support me in my efforts. Such a great lady who will be missed by so many people who had the pleasure of knowing her. RIP Dear Teri & may your family’s sadness be...

I met Teri at the Leisure World Sunshine Club and there are not enough good words to describe her. Teri was considerate, genuine, bright, kind, humorous, talented and a sincere joy to be around. She would sometime call just to see how I was doing or to thank me for some club service. I cannot remember her without putting a smile on my face. May God bless you and your family. May you rest in peace and love.

We met Teri through a spiritual community in Long Beach during the mid-2000s. She made such an impression on us, in just the little time we spent with her during group social gatherings. She made you feel good about humanity: exuding graciousness, intelligence, excellence. Rest in peace and power and love, Teri.

Perhaps a year and a half ago, I was blessed to spend an evening under the stars with this amazing human being. I will always remember that evening and the feeling of joy of being with Teri, Teresa and JoJo. My heart smiles that she is safely “ home”. Cher Mang and JoJo Harmon

I am a member of the Sunshine Club in Leisure World. I loved seeing Teri on our Zoom calls this past 2 years. She was so smart and had a great sense of humor. I often remarked to my husband how great her questions were and she was always so interesting. I want to be like her at 89 years old! She often talked about how lucky she was to live in Leisure World and to have a wonderful daughter to help her. God bless her and her family.

Teresa, we were sad to hear the news about your Mom! She was a wonderful, lovely woman with so many talents! It is not easy to lose a parent but it is nice to know that you and your Mom got to spend so much time together lately. Our prayers are with you and with the family during these sad days! Sending our love to all!❤

It is finally "sinking in" that Teri is on her next journey and I will only see her in my memories. And wonderful memories they are. When I met Teri and Bob and Teresa years ago at our spiritual center, I knew I was in the presence of very special people. Teri was always positive and ready to help, go, share; whatever was going to happen. Fun times together, which Teresa made happen, are memories I'll always have. In recent times she enjoyed sharing a lot of her early life and I...

Teresa "Teri" Subia was born in Los Angeles and passed away at the age of 89 years in Long Beach, California at the home of her daughter, Teresa, surrounded by the love and comfort of Teresa and nieces Sonia Subia and Juana Nunez.

Teri attended parochial and public schools in Los Angeles. She studied piano for 13 years and listened to stories her mother told her about their ancestors in Mexico. Teri loved learning, remaining in contact with friends and teachers from elementary school. She was president of the Spanish Club in high school. When Teri's father passed away in her teenage years, Teri's mother Elisa, brother Manuel and she worked hard to make sure that all, including minor siblings John and Anna, had a path to success. Teri and her mother, brothers and sister shared a loving bond for the rest of their lives.

Teri married and had a daughter, Teresa. In the early 1960s, Teri started working in finance and banking and became Vice President of a major bank at a time when Latina women were not routinely invited into upper management. She was a founding member of the group "Hispanics in Banking," a role model for young women, and a mentor to many. Teri was recognized for her skills in human resources, her charming and gracious personality and sense of humor. During her professional climb, she supported her daughter Teresa through law school and entry into the Bar.

After retiring from banking, Teri became an executive officer at a non-profit corporation and under her leadership, hundreds of people receiving government aid were placed into full-time employment. Teri often said that this was her most rewarding work.

When Teri fully retired, she and her late husband, Bob, traveled throughout the USA, Europe, the Caribbean, Mexico and more. They loved dancing, West Coast jazz, major league baseball, spiritual studies, socializing with family and friends from Bob's military days, and spending time with their daughter Teresa at Spring Training, baseball games, spiritual events, and enjoying the arts.

Teri was also active in her retirement community with Senior Patriots for Peace, writing grants, authoring articles for a community newspaper, promoting an annual fundraising drive, and making stunning holiday baskets for silent auctions. Teri loved learning, teaching others what she knew and giving good advice. Her enthusiasm easily influenced others to have fun while becoming educated and making friends. During this time in her life, Teri took the stories her mother told her as a young girl and wrote, illustrated and self-published a book about four generations of her family. She enjoyed sharing these stories on many memorable visits with her sister, sister-in-law, nieces, and their children who regularly visited her from other states.

Teri's daughter says that no matter where she goes, people tell her: "I just love your mom!" "She is such a great lady!" "I would do anything for her!"

Teresa plans two memorial services for Teri, one in Texas and one in Southern California, with location and date to be announced later so that those in attendance may have the benefit of continued good health and comfort. Please contact Teresa Danton at (562) 305-2056 for further information.