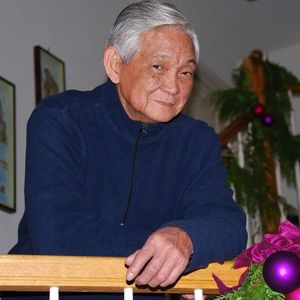 Valerio Velasco Bautista passed away peacefully in his sleep surrounded by family in the early morning hours of April 15, 2021. A longtime resident of Cerritos, CA, Valerio was 84. He was born January 28th, 1937, in Binmaley, Pangasinan in the Philippines. He was the 5th of 10 children born to Silverio Fernandez and Serviliana Velasco Bautista. Silverio was a school principal and Serviliana a housewife who took care of the large family. They had seven boys and three girls. It was growing up in the Caloocan Sur area of Binmaley that Valerio discovered his love and passion for fishing. His neighborhood was surrounded by the Binmaley River and not far from the beaches of the Lingayen Gulf. He was also a good diver and swimmer. In 1966, at the age of 29, he married Adelaida Deogracias in Binmaley. Adelaida was 34 at the time and a widow with five children. The couple went on to have five children of their own, creating one big blended family. In 1974, Valerio and Adelaida, along with most of their children, immigrated to the United States, settling in the Long Beach area of Southern California. Within months of moving, Valerio went to work for the County of Los Angeles. He was employed by them for nearly 30 years before retiring in 2005. He and his wife had a variety of side businesses, including running several boarding care homes. The couple moved from Long Beach to Cerritos in 1985 and remained there until their deaths. Adelaida passed away in 2014. Valerio lived a healthy and active life. He had numerous hobbies and passions, aside from fishing, including gardening, playing poker, hosting family events, and dancing, among many other things. He was a kind, gentle and giving soul and a true patriarch who will be greatly missed. He is survived by nine children, Merie Joy Aquino of Long Beach, Evelyn Cerezo of Long Beach, Jay Damacion of Fishkill, NY, George Damacion of Long Beach, Gerry Damacion of Whittier, Primo Bautista of Long Beach, Alex Bautista of Cerritos, Edgar Bautista of Los Olivos, CA and Vilma Roman of Brea. His daughter, Mary Jane Ludwick, of Reno, NV, preceded him in death. He is also survived by a brother, George Bautista, of Livermore, CA, and a sister, Rosie Castro, of Manteca, CA, as well as 24 grandchildren and 12 great grandchildren.