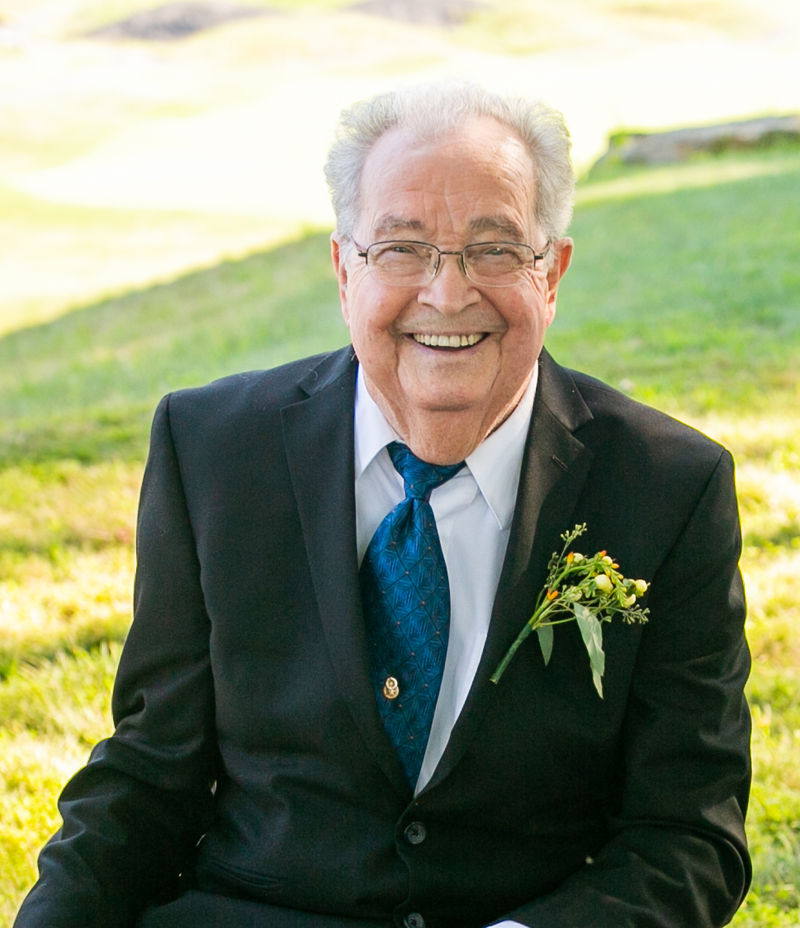 Thank you so much Vern for all your love and support to our church in Hacienda Heights. You have helped us in many ways and it was very much appreciated. Have a safe journey home. Rest In Peace dear Vern Grimshaw.
Our deepest condolences to Vern’s family. May God’s peace & love comfort you all during your time of sorrow.
Toa & Siniva Mauala

I first met Vern when I worked at Shell in the Pipeline Joint Ventures group. Vern was the Unocal representative on a number of pipeline joint ventures with Shell. Among the various senior owner representatives from other oil companies Vern stood out as the one who was uniquely well qualified, polished, reasonable, and nice when most of the others we frankly none of the above. Vern quickly earned my respect and admiration. When I left Shell and started up an independent pipeline company...

My husband and I first met Vern and Marilyn at the San Gabriel & Pomona Valley Polio Support Group in November, 2015. From that moment on, it was as if we had been friends forever. Marilyn was the love of Vern’s life, and he once told me that his wish was to live long enough to care for her until the end of her life. He did just that, and then some. But it is always too soon to lose those who are so dear to us. He was one of the sweetest, kindest, considerate person ever to meet He will...

An extraordinarily special man, loved by so many. He once gave me an honor in saying he thought of me more like a sister than a niece and after his last sister, my Mom Nadine, passed 2 years ago, he started calling me Sis. (He needed one.) I will miss the adventure stories of his younger days, especially working for the carnival in tiny Washington and Oregon towns. He lived his life to the fullest with Marilyn being his biggest treasure and love.

I first met Vern in 2008 when he and Marilyn joined the Polio Support Group of the San Gabriel Valley & West Inland Empire. Although he was not the polio survivor, Vern was never thought of as “Marilyn’s husband” or just an honorary member. He provided technical support and visual aids during our meetings, he maintained the group’s extensive library of printed materials, and, above all, he was an amazing example of a loving husband and caregiver for Marilyn before her passing in 2019. ...

So very sorry for your loss.
Looks like he was an amazing man❤
You are all in our thoughts and prayers ❤

Sending all our love to his family. He will be dearly missed.

I will miss you. Thank you for always being there for me. I will never forget visit you in CA and hanging out with you and Marilyn for the weekamong other things. I promise to follow through on what we talked about at Gramp’s funeral. Tell him hi for me, will you??

Meeting you Vern, under the worst possible circumstances but sharing the love for our veterans has been a distinct honor for me! You were a pillar for us all and your love was felt by all. Rest now brother, we have your 6.

Vern Ellis Grimshaw, 87, of Hacienda Heights, California passed away on November 9, 2021. He was born on April 5, 1934 in Goble, Oregon, to the late Raymond and Golda Grimshaw. He was the youngest of nine children. After graduating from Lincoln High School in Portland, Oregon in 1951, he attended Oregon State University where he earned a Bachelor's Degree in Mechanical Engineering in 1955. On July 30, 1956, he married Marilyn Valene Pettichord in Portland, Oregon.

He lent his knowledge and expertise as co-author of the published work Transportation of Petroleum (a section of "A Handbook of Energy Systems Engineering") that has been referenced many times since being published in 1985.

After retiring from Union Oil/Unocal in 1990, he continued as a consultant providing operational audits and compliance reviews for liquid pipeline and terminal companies to assess operation performance and compliance with industry standards and agency regulations. He developed spill response plans for companies across the United States and assisted pipeline companies and individuals by authoring white papers for various research projects. He was always proud of the work and services he provided, especially as a member of a consulting firm that helped the St. Bernard Parish government after Hurricane Katrina hit New Orleans. Though he experienced very harsh conditions, he was there to help in anyway the Parish needed and provided much needed support to a community in crisis.

Though his work required him to travel for business across the United Stated, he always made time for family and friends. Because he was always traveling, he had his fair share of traveling woes and close calls. Once close call that our family remembers quite vividly was one of his trips to Chicago. As he headed for O'Hare International Airport to return home, he took a wrong turn and ended up missing his flight. That flight would end up crashing off the end of the runway, leaving a lot of worried people in California. He immediately notified his family and co-workers that he was safe and not on the flight.

He was active in the Southern California Patriot Guard Riders and a contributor to many charitable organizations, including Meals on Wheels and Friends of the Griffith Observatory. He was active in the San Gabriel & Pomona Valley Polio Support Group and he stayed in touch with high school and college friends by helping to coordinate reunions and get-togethers. Vern remained friends and stayed in contact with his Union Oil/Unocal and consulting co-workers up until his passing.

Always needing a project to work on, he designed and built two homes, one he and Marilyn lived in since 1979 and one in Temecula, California.

He was preceded in death by his wife Marilyn (2019), his grandson Jeremy Grimshaw (2011), his parents and all of his siblings.

Visitation will be held on December 2nd from 9AM to 11AM at Forest Lawn Covina Hills followed by a graveside service at noon. In lieu of flowers, memorial donations may be made to Meals on Wheels City of Industry or to a charity of one's choice in Vern's name.

A Celebration of Vern's Life will be held at a later date.