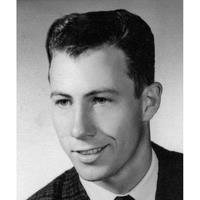 I love you daddy.

Get email updates about Virgil Burks delivered directly to your inbox.

A graveside service will be held at 1:00 p.m. Thursday, February 20, 2020 at Oak Hill Cemetery with Rev. Kenny Springer officiating.

Virgil was born on March 12, 1944 in McAlester to Grady and Gladys (Cathey) Burks. He was raised in the Indianola area.

He traveled for many years as a supervisor while working on communication towers for AT&T. Later, he worked for Ericsson.

Virgil was a loving father and grandfather, and was known for his hard work and his big heart full of love to make sure is family was taken care of. He was an avid football fan, enjoying watching the OU Sooners and the Dallas Cowboys. Virgil also was a monthly supporter of Saint Jude’s for many years, and enjoyed fishing and gardening.

He is also survived by his brother and sister-in-law: Ronald Burks and wife, Susan of Savanna; brother-in-law: Jack Pingleton and wife, Cindy of McAlester; and sister: Darlene Steel and husband, Jimmy of Fort Smith, Arkansas.