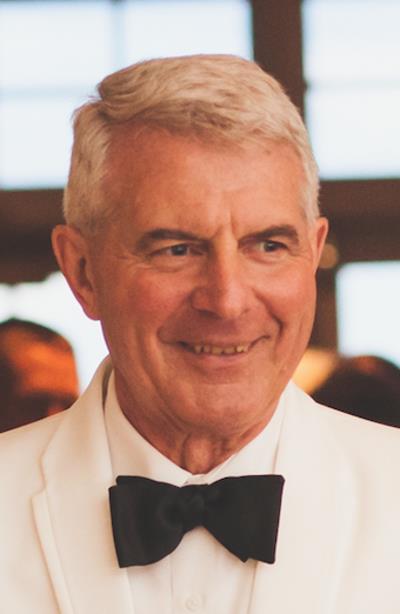 What a beautiful memorial service today to honor Ward. He exhibited many laudable character traits, including kindness, generosity, diligence, curiosity, and encouragement, to name a few. As a new faculty member at Wheaton College back in the early 90s, I was on the receiving end of countless demonstrations of his administrative support. In his work interactions, Ward brought fairness, and an abiding confidence ("with trust/faith"), often seasoned with a joyful sense of humor. As a...

I remember Ward as a very special classmate and friend. He was always so kind to everyone. My prayers go out to all his family. I know that he will be missed by so many. God Bless

When I arrived at Wheaton College, it was Ward Kriegbaum who invited me to have lunch with him on a regular basis. I missed his easygoing conversations upon his retirement. What a blessing he brought to every encounter!

Dear Kristen, Courtney and Kent, Stephanie and Dan, and Matt and Evie, We send our love and prayers to each of you. Your husband, your father, was an extraordinary man with an expansive heart. What we observed of Ward was that he was “all in” for each of you, and he had that depth of character and love for God that enabled him to be “all in” to those around him, whether they worked at Wheaton or lived on your street. Glenn considered his years at Wheaton to be the highlight of his career,...

Ward will be remembered as a special classmate of the Warsaw High School's class of 1960. He loved the Lord and was caring, humble and a person of great character. Loving prayers and sympathy to his family.

Yes, indeed, Ward was one of the most visible--if quiet--supporters and personal fan of Wheaton's athletic program. Always at the games and encouraging the student-athletes. As chair for 26 years of the Hall of Honor Selection Committee, I could count on Ward's behind-the-scenes counsel on any question about eligible nominees. In my 71 years on the campus scene I know of no one who was more universally cheerful, friendly and helpful to all. Wheaton needs more Ward Kriegbaums.

I send my sympathy to Kristen and all the family and recall Ward's deep love and concern for people in his administrative work. He was a sincere follower of the Lord, evident in his life and in the devotions he led for staff in the academic office at Wheaton C. every Monday morning at 8 a.m. Ward's love for his family showed in the way his face lit up when he spoke of them or when one of them stopped by the office.
Patricia Ward, Nashville, TN., Dean of Arts and Sciences, Wheaton...

Kristen and the Kriegbaum family, Shirley and I have great memories and fond regards for Ward and his pleasant greeting every time we met. As our most recent neighbor we looked forward to seeing him walk past on his exercise regimen and spending a few moments of friendly updates on events in our families. Your impact on so many students and faculty at Wheaton College will always be remembered. Your ability to serve in so many different projects and programs at the college was indeed a...

Get email updates about Ward Kriegbaum delivered directly to your inbox.

Ward A. Kriegbaum, 79, of Wheaton, Illinois, died Friday, June 18, 2021, at Tabor Hills Health Care Facility in Naperville, Illinois. He had been in declining health the past several years.

Kriegbaum was born May 2, 1942, in Long Beach, California, to Arnold and Laura Kriegbaum. He married the former Kristin Adair Auxt of Hagerstown, Maryland, on August 21, 1965. August of 2021 would have marked their 56th wedding anniversary.

A graduate of Warsaw Community High School in Warsaw, Indiana, he attended Wheaton College and was awarded a bachelor’s degree in history by Grace College, Winona Lake, Indiana, in 1964. He went on to earn a master’s degree in psychology from Indiana University in Bloomington, Indiana, and a Ph.D. degree in higher education administration from Purdue University in West Lafayette, Indiana.

After brief employment by Grace College and by LeTourneau College (now University) in Longview, Texas, he joined the administration and faculty of Wheaton College, where he served the next 36 years in various positions, including Dean of the Faculty, Vice President of Academic Affairs, and in student affairs positions. He was honored by the Wheaton administration upon his retirement in May of 2007.

Ward was a beloved figure in his work with students and faculty on the Wheaton campus. In addition, he oversaw the leadership of Honeyrock Camp, a Wheaton College camp in upper Wisconsin. He also served in leadership of the Wheaton Football Ministry Program (WFMP) in which he traveled to many countries ministering and mentoring students. Students and faculty alike testify to his indelible impact on their lives.

In recent years he and his wife served in leadership of the Eastern European program for adult students, in which Eastern European students are brought to the U.S. to spend six weeks under the leadership of Wheaton faculty hand-chosen by Kriegbaum for mentorship. The Eastern European Tutorial is under the auspices of Faith and Learning International. Ward made it a point to get to know each participant personally, thus leading many to return to the U.S. to visit and to be hosted by the Kriegbaums during their stay.

Kriegbaum was an avid football fan, having played in high school and at Wheaton College. He was a staunch supporter of Wheaton College football, thus leading to his travel to many countries with the team. He was a lover of overseas travel, which began when he was 20 and joined Gordon College for their summer program traveling throughout Europe.

As senior vice president at Wheaton College, he made many trips abroad and was the college’s representative in establishing Daystar University in Nairobi, Kenya. Many faculty members traveled there to serve in teaching roles for short periods of time, and the original degree from Daystar was awarded by Wheaton College. Eventually the university became independent, awarding its own degrees.

He was an accomplished horseback rider where he enjoyed riding at Lost Valley Ranch in Colorado and at Honeyrock Camp in northern Wisconsin. He had a dear friend in Wheaton who owned several horses and took him riding on a regular basis.

Kriegbaum was a member of, and active in, the Glen Ellyn Evangelical Church in Glen Ellyn, Illinois.

In addition to his wife, Kriegbaum is survived by a brother, Richard (Peggi) Kriegbaum of Fresno, California, and a sister, Karen (Chuck) Bragg, of Fishers, Indiana. He is also survived by two daughters, Courtney (Kent) Graham of Wheaton, Illinois; Stephanie (Dan) Waldron of Naperville, Illinois; and a son, Matthew (Evie) of Arroyo Grande, California, and nine grandchildren. He was preceded in death by his parents and an infant daughter, Adair.

The family would like to thank each of the many individuals who have impacted and shared in Ward’s life. Any letters of memory, or tribute to Ward will be displayed at his ceremony, and can be sent care of Stephanie Waldron at 204 Claremont Dr. Naperville, IL 60540 or emailed to [email protected] by July 12, 2021. Family and friends may sign a guest book at hultgrenfh.com. For more information, please call Hultgren Funeral Home at 630-668-0027.

In lieu of flowers, the family requests that if you feel so led to give to an organization in his honor it would be Wheaton College where he spent his life serving and loving faculty and students. (Ways to Give - Wheaton College)