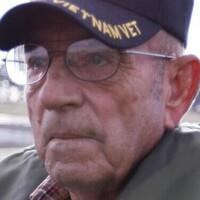 I am sorry sorry to hear of the loss of your loved one. May God bless the family with the peace that only He can provide!

I was saddened to learn of the death your loved one. To Dawn and family my most heartfelt sorrow for your loss. May God bless you with many wonderful memories.

Prayers from my family to your family.

Dawn and Kenny
I am so sorry for your loss. I have so many wonderful memories of WC. He and daddy always seemed to get into stuff! I loved WC like he was my dad! Love you both and I will be praying for y’all. Need to talk please let me know.

Bradley and I are so sorry for your loss.

Get email updates about W.C. Richardson delivered directly to your inbox.

Funeral services will be held on Wednesday, June 16, 2021, at 10:00 a.m. at Sneed Funeral Chapel.  Burial will be at 1:00 p.m. at the Central Texas State Veteran's Cemetery in Killeen, Texas with military honors.

He was born March 28, 1946, in Brundidge, Alabama to parents, Carl Richardson and Florence (Henley) Richardson.  W.C. joined the U.S. Army immediately following high school.  He served for 18 years and was later medically discharged.  He served during the Vietnam War, among his many achievements was the Bronze Star Medal.  Later he worked as a rock and stone mason for many years.  He also had worked in power line construction and plumbing.  W.C. enjoyed hunting, fishing, cooking, being outdoors, and spending time with family and friends.  He was especially proud of and dedicated to his grandchildren and great-grandchildren, never missing an event while able to attend.  W.C. was also a lifelong Baptist.

He was preceded in death by his wife, Ute Richardson in 2012, and sisters, Alice Hughes and Dean Mobley, and brothers, Donnie and Lonnie Richardson.