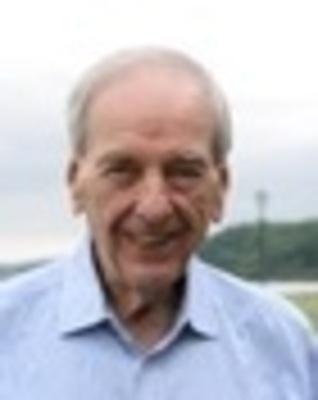 on behalf of my late father Edwin Strauss who was your insurance agent I want to express my sympathies for your loss. I remember Dad was displaying his DeCoupage plaques in the Gibson Store in Montvale New Jersey & how Bill came to Dad's wake, speaking to my late mother. Again I am sorry for your loss.

Dear Miller Family, Just learned of the passing of your great Dad! I first met Bill when I was a freshman at Manhattan College in 1949! We became fast friends. He invited me to many sports events through the years. We also worked together at Community Counseling Service, INC in the Empire State Building. I live in Seattle and had an hour's chat with Bill about a year ago. I have told my wife and children about Bill and what a wonderful person and friend he was. I knew Joan too and now...

Such a sweet man. The Angels are rejoicing! Prayers and blessings to the miller family.
Carole D'Achille

Sorry for your lost!! I'll pray for you.

I worked for Bill as a sports public student writer and he got me a job as a stringer. He was a great boss and a fine man. He will be missed by all that knew him especially those Quadrangle editors at Manhattan College.

To all family and friends : I am very sorry for your loss . Losing a loved one is very difficult . I hope all can be together during this time and may God be with you as well (Phil 4:6, 7)

Thad, we were so sorry to hear about your loss. Our thoughts and prayers are with you and your family. Reading that your Father was a wonderful storyteller explains it all! You are your father's son.
Norma Dunn and Lauren James Harstad

Thad, Maryellyn and Family,
Our thoughts and prayers are with you all.
Sorry to hear of your loss.
Jack, Kristin Fusco and Family

Get email updates about William Miller delivered directly to your inbox.

William J. Miller died on May 20, 2015, at the age of 91, surrounded by his loved ones. His smile, zest for life, and gift of storytelling will be missed by all who knew him.Born on June 19, 1923, in New York City to Alexander and Sara Miller, Bill graduated from Manhattan College with a BA in History. He served as a corporal in the U.S. Army Air Corps, 13th Air Force, from 1943 to 1945 in New Guinea, then at the end of World War II under General Douglas MacArthur at the Imperial Hotel in Tokyo, and ultimately as a Second Lieutenant in the U.S. Air Force Reserves. On February 19, 1949, he married Joan Gibson at Sacred Heart in the Bronx. Bill lived in Pearl River, NY for the past 62 years and was an active parishioner at St. Aedan Catholic Church. Mr. Miller owned a medical publishing company and was a sports journalist for the New York Times for 60 years. Among his many publications, his Dialogues in Pediatric Urology earned recognition from the Society for Pediatric Urology. His passion was track and field, for which he received numerous accolades, notably, the Penn Relays Jesse Abramson Award and the NYC Armory's Stan Saplin Sports Media Award; additionally Hall of Fame inductions for Catholic High Schools Sports, Manhattan College Athletics, and just this week into the Rockland County Track & Field.He is the loving father of Thad (Maryellyn) of Houston TX, Chris (Ray Reyes) of Jersey City NJ, Timothy (Tom) of Pearl River NY, Terence (Joan Kelly) of Milwaukee WI, Alithe (Tom) Thompson of Highland Mills NY, and Tracey (Chris Zamberlan) Miller of Chevy Chase MD. He is the dear grandfather of Thaddeus (Britt), Cameron, Matthew, Tyler, Ali, Gabriela, Quinn, Aidan, Magdalena, and Fiona; and the great-grandfather of Zadie. He was preceded in death by his wife who died in 1993. He will be fondly remembered by his sister-in-law, nieces, nephews, and cherished friends.Bill's life will be celebrated at the Wyman-Fisher Funeral Home in Pearl River from 4-8pm on Friday, May 22. The funeral Mass will be at St. Aedan's in Pearl River at 10am on Saturday, May 23, followed by interment at the Gate of Heaven Cemetery in Hawthorne NY. In lieu of flowers, donations in Bill's memory can be made to St. Jude Children's Research Hospital, https://shop.stjude.org/GiftCatalog/donation.do?cID=14262&pID=24671