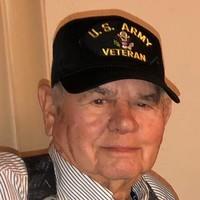 We are sorry to see him go. We will miss him. We will never see a bottle of Cholula without thinking of him.

So sorry for your loss, prayers for the family.

Get email updates about William Reynolds delivered directly to your inbox.

Bill was an avid racing fan; Nascar was his favorite. He even built and raced his own sprint car in the early 70’s. He loved motorcycles and rode his Goldwing on the weekends out in the country. He and Ginger even rode it into Mexico on several trips with other friends. Most days after work, you could find him out in his garage either working on a car, tinkering with his tools or building model airplanes.

Bill worked for the Houston Belt and Terminal Railroad as a locomotive engineer and retired with 42 years of service. Before his railroad career he worked as a Harris County Deputy Constable. Prior to his professional career he served in the US Army during the Korean War.

He was a loving caring husband, father, grandfather, great grandfather and always looked forward to visits from his grandchildren who he loved dearly.

In lieu of flowers the family requests donations be made to St. Katharine Drexel Catholic Church for Mass intentions for Bill’s wife Ginger.

Interment will follow at 2:15pm at the Houston National Cemetery.