Ayn Rand died March 6, 1982. On the anniversary of the philosopher and novelist’s death, we offer a reading list of her lesser-known works. 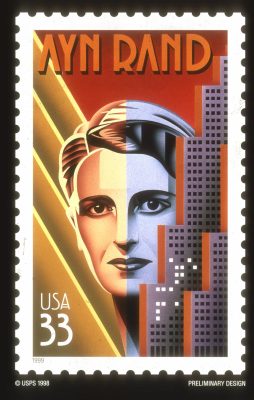 Ayn Rand is the philosopher darling of the Libertarian Party, beloved for her unflinching view that the individual is of utmost importance. Her Objectivist philosophy called for people to pursue their own happiness above all else, strive for achievement and productivity, and embrace reason over emotion. She was unusual among philosophers for best expressing her views via fiction: her Atlas Shrugged and The Fountainhead are far more widely read and discussed than her nonfictional manifestos.

But her two top-selling novels weren’t the only fiction she wrote. On the 30th anniversary of Rand’s death March 6, 1982, we look at her earlier works of fiction.

Rand’s first published fictional writing was the 1933 play Night of January 16th. A courtroom drama about a murder trial, the play was an early example of interactive entertainment, drawing its jury members from the audience. With different jury members at every performance, the play was written with two different endings, and each jury was able to determine whether the audience would see the “Guilty” or “Not Guilty” ending. Producers were initially wary of this quirky technique, but it proved to be an audience draw and propelled the play to Broadway success.

Night of January 16th presents the case of Bjorn Faulkner’s murder. A shady investor, he has swindled millions of dollars and faces bankruptcy. The play’s courtroom trial attempts to discover if his death was a suicide or if he was murdered by secretary and mistress, Karen Andre. Witnesses provide a variety of accounts, some of which contradict each other – and neither the jury nor the audience ever learns the real story. Readers and viewers are left to make our own conclusions based on the testimonies. Written when Rand was in her late 20s, the play gives us a glimpse at her early philosophy as she incubated it – defendant Andre serves as a mirror of Rand herself, a non-conformist, an atheist, an independent woman who values the importance of the individual.

Two years later, Rand published her first novel, We the Living. According to Rand, it was the closest she would come to writing an autobiography – although the novel’s events weren’t based on her own life, her childhood and young adulthood in post-revolutionary Russia certainly shaped the book. At the time of the 1917 Russian Revolution, Rand was 12, and she saw her family’s business seized by the Bolsheviks. The family fled to the Crimea, which was still under the control of the tsar’s White Army, but four years later they returned to Soviet Russia. There, they endured the country’s bleak conditions, facing starvation at times. For Rand, it was a first-hand view of how badly Communism was failing, and she took the first available chance to get out, traveling to America on a visa and marrying a citizen while she was there.

Communism was the antithesis of Rand’s Objectivist philosophy, and she was vocally against it. We the Living was an early example of this opposition, and although it was released to little fanfare in 1936, the 1959 reissue was a much greater success. The reissue came at the height of the Cold War, when U.S. readers were caught up in the Red Scare and terrified of the Soviets. Ayn Rand herself had famously testified as a “friendly witness” (aka anti-Communist) before the House Un-American Activities Committee in 1947, denouncing Communist influence in Hollywood and specifically speaking against the Soviet-friendly film Song of Russia. She agreed wholeheartedly with the Committee’s blacklisting of Communist Party members from working in Hollywood, once writing, “The principle of free speech requires … that we do not pass laws forbidding [Communists] to speak. But the principle of free speech … does not imply that we owe them jobs and support to advocate our own destruction at our own expense.”

We the Living was Rand’s novelization of all she saw wrong with Communism. Kira Argounova (another Rand-like character – they crop up in most of her fiction) is the protagonist: formerly comfortable capitalists, her family has been reduced to poverty after the new government seizes and nationalizes their business and home. Kira struggles to attend school and become an engineer – and by doing so, to be an individual, an important member of society rather than just another of the great mass.

Rand published one more work before The Fountainhead catapulted her to fame – 1938’s novella Anthem. Also influenced by Rand’s childhood in Communist Russia, Anthem imagines a dystopian future in which individuality has been so thoroughly crushed that the words I, me, and myself are outlawed and unknown. Citizens are given names like Equality 7-2521 and Liberty 5-3000, and they can speak only collectively: as the protagonist describes himself, “We are six feet tall, and this is a burden, for there are not many men who are six feet tall.”

It’s what Rand saw as the outcome if Communism were to be carried out to a horrific extreme. Technology has regressed, with electricity unknown and unused; the wilderness is feared and shunned; individual talents are ignored and a brilliant artist is assigned to be a street sweeper, forbidden to draw.

“Ego” is often seen as a negative: we criticize someone for being egotistical; we tell them to check their ego before they become an egomaniac. But for Rand, ego was the ultimate virtue. Her philosophy not only allows us to be egotistical; it suggests that to be any other way is not entirely moral. Ego was so important that her Anthem protagonists, after rediscovering that forbidden word, carve it in stone and place it over their front door.

Ego is just as important to Rand’s most successful books, The Fountainhead (1943) and Atlas Shrugged (1957). Those novels are the full realization of the ideas that percolated in her earlier works. Fans of Rand’s characters Howard Roark and Dominique Francon, Dagny Taggart and John Galt, may want to dip into her lesser-known works to learn more about the evolution of her Objectivism.

Watch Legacy’s Heartfelt Tribute to the Celebs Who...