Alan Rickman, a British actor who played bad-guy and other film roles to perfection, has died. He was 69. He died Thursday, Jan. 14. The death was announced by the actor’s family, noting that he died of cancer.

Alan Rickman, a British actor known for varied roles in films including “Die Hard” and the “Harry Potter” series, has died. He was 69. 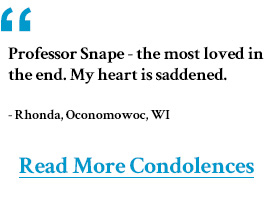 He died Thursday, Jan. 14. The death was announced by the actor’s family, noting that he died of cancer.

American audiences got to know Rickman with his Hollywood debut in “Die Hard” (1988), in which Rickman played terrorist Hans Gruber opposite police detective John McClane, played by Bruce Willis. The movie made Willis an action hero and Rickman the consummate villain, an archetype he’d play in other roles over the years until it became indelibly associated with him.

“Die Hard” had Rickman’s character taking hostages and placing bombs in a Los Angeles skyscraper as he attempted to steal millions of dollars from the building’s vault. Suave yet chilling, Rickman played the memorable bad-guy role to perfection. It was a departure for an actor who had been classically trained and previously excelled in serious stage work. Rickman initially wasn’t even interested in the role, according to the Hollywood Reporter, wondering why anyone would send him an action script. After being convinced to take it, he grew into the role and came to find that, though his scenes with guns were initially stressful, “It is shocking how thrilling it is to shoot a machine gun.”

Rickman’s character didn’t survive the movie – he fell to his death, and to shoot the scene, producers dropped Rickman himself 70 feet over a green screen. As revealed in the film’s DVD commentary, Rickman was genuinely terrified by the experience, and it showed in the look on Gruber’s face. Though Rickman wouldn’t appear in any of the movie’s four sequels, other than in flashback in “Die Hard With a Vengeance,” his performance helped make “Die Hard” a classic and secured his own Hollywood reputation.

Theatre audiences were already familiar with Rickman before he came to Hollywood, owing in large part to his breakout role in a 1985 stage production of “Les Liaisons Dangereuses” with the Royal Shakespeare Company. Playing the lead role of the lothario Vicomte de Valmont, Rickman seduced audiences and earned a reprise when the production came to Broadway in 1987. His masterful performance on Broadway brought him nominations for a Tony Award and a Drama Desk Award.

Rickman’s longest-running role was the one that many audiences most associated him with: Professor Severus Snape of the “Harry Potter” film series. Rickman was a major player in all eight of the movies, debuting in 2001 and coming to an emotional finale in 2011. He was hand-picked by author J.K. Rowling to portray the multifaceted character.

While fans saw Snape largely as a villain until the revelation in the final film of his status as a double agent and a force for good, Rickman long knew the arc his character would take. Before the book series had even been completed, according to the Los Angeles Times, Rowling secretly revealed to Rickman alone the ending she had planned for Snape, in which his tragic love story would be explained. The conversation helped inform Rickman’s work in the series, and there were times when he brought his knowledge of the character to his portrayal in ways that were inscrutable to the films’ directors and writers – who didn’t have the information Rickman had about the character.

Rickman’s “Harry Potter” colleagues were among those who expressed grief and paid tribute to a friend upon hearing of his death. Rowling tweeted, “There are no words to express how shocked and devastated I am to hear of Alan Rickman’s death. He was a magnificent actor & a wonderful man.” Daniel Radcliffe, who played Harry Potter, shared a remembrance on Google+ that included, “As an actor he was one of the first of the adults on Potter to treat me like a peer rather than a child. Working with him at such a formative age was incredibly important and I will carry the lessons he taught me for the rest of my life and career.” Michael Gambon, the second actor to portray Albus Dumbledore, also remembered Rickman as a friend: “Everybody loved Alan. He was always happy and fun and creative and very, very funny.”

Rickman further honed his villainous side in roles including the Sheriff of Nottingham in “Robin Hood: Prince of Thieves” (1991), but his range went far beyond the bad guy. He was a romantic lead in “Truly, Madly, Deeply” (1990) and “Sense and Sensibility” (1995). He portrayed non-human characters including Marvin the Paranoid Android in “The Hitchhiker’s Guide to the Galaxy” (2005) and the angel Metatron, the voice of God, in “Dogma” (1999). In “Galaxy Quest” (1999), art echoed life as he played a classically-trained actor in a less-than-serious role as an alien in a Star Trek-esque series. Other fan favorites included “Love Actually” (2003), “Michael Collins” (1996) and “Sweeney Todd: The Demon Barber of Fleet Street” (2007).

A crucial part of Rickman’s appeal was his deep, rich voice, unmistakable to anyone who had ever heard it. More than memorable, it was deemed near-perfect by a team of researchers, who created the “perfect male voice” in 2008 by combining Rickman’s tones with those of Jeremy Irons and “Harry Potter” costar Gambon. That perfect voice led to roles in voice acting, notably as Absolem the Caterpillar in Tim Burton’s “Alice in Wonderland” (2010). But Rickman told NPR that a drama teacher once accused him of sounding like his voice was “coming out of the back end of a drain pipe.” Rickman countered, “Well, it’s what I’m stuck with, so it’s not like I can go and get another one.”

The actor, who was born Alan Sidney Patrick Rickman Feb. 21, 1946, in London, England, also worked in television, winning a Golden Globe Award and an Emmy Award for his performance as the titular character in 1996’s “Rasputin: Dark Servant of Destiny.” He garnered another Emmy Award nomination for his work as Dr. Alfred Blalock in 2004’s “Something the Lord Made.” Rickman also dabbled in directing, with “The Winter Guest” in 1996 and “A Little Chaos” in 2015. And he returned to the stage throughout his career, starring on Broadway and elsewhere in productions including “Antony and Cleopatra” (1998), “Private Lives” (2002) and “Seminar” (2011).

Rickman had completed two roles in films that were unreleased at the time of his death. “Eye in the Sky,” due for U.S. release in March, is a thriller centering on military action against a terrorist group. And in “Alice Through the Looking Glass,” coming to theaters in May, Rickman reprised his voice role as Absolem the Caterpillar.

Rickman is survived by his wife, Rima Horton. They had been together for more than 50 years, and they married in 2012.

We invite you to share condolences for Alan Rickman in our Guest Book.