Audrey Hepburn starred in some of the most memorable films of her era.

The incomparable Audrey Hepburn, who died Jan. 20, 1993 at age 63, starred in some of the most memorable films of her era. Today we highlight her best — and best-loved — roles.

Hepburn landed her breakout role opposite Gregory Peck in a part originally written for Elizabeth Taylor. Actress Jean Simmons was also high on director William Wyler’s list, but Hepburn landed the role after a screen test. More impressive to the director than the scene she performed was her demeanor when candidly speaking to him afterward (unbeknownst to her, the cameras were still rolling). The first Hollywood movie to be filmed entirely on location in Italy was also Hepburn’s first major role. Her co-star Peck was so sure she would win an Oscar for the performance that he told the studio they should put her name above the title (they did, and Hepburn won). The studio was so pleased with Hepburn’s work that they gave her the entirety of her wardrobe — expensive dresses, hats, handbags, and jewelry — as a wedding present for her upcoming nuptials to businessman James Hanson. The engagement, however, was called off before the movie was released.

As in Roman Holiday — and many of Hepburn’s movies, in fact — she once again plays a woman who falls romantically for a man old enough to be her father. In real life, she did reportedly have an on-set romance with co-star William Holden, but ended the relationship when she learned he was unable to have children. Humphrey Bogart was also in the picture, though he was none too happy about it, quarreling with Holden (who he called ‘Smiling Jim’) and complaining about the multiple takes Hepburn needed to nail her dialogue. He was also unhappy that director Billy Wilder began shooting with a still unfinished script. (In fact, Wilder once convinced Hepburn to feign illness in order to postpone shooting a scene that hadn’t actually been written yet.) Sabrina marked Hepburn’s first time working with French designer Hubert de Givenchy, who would provide her wardrobe for most of her career.

One of the most celebrated movies in American history (Mickey Rooney’s painful ‘yellowface’ performance as Mr. Yunioshi aside), Breakfast at Tiffany’s provided Hepburn with the kind of iconic role even many of the biggest movie stars are never lucky enough to find. Once again, she wasn’t the first choice — author Truman Capote had wanted Marilyn Monroe and the studio had given him assurances the role was hers. But Monroe demurred partly on the advice of acting coach Lee Strasberg, who felt playing a prostitute would be bad for her image (Kim Novak also claims to have passed on the role). Though Hepburn didn’t mind playing a call girl, she did balk at hints of her character’s bisexuality and had them removed from the script. 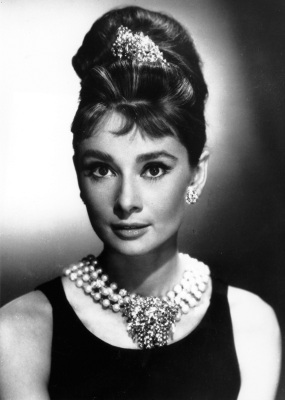 Hepburn singing “Moon River” — a song written by Henry Mancini in a single octave as Hepburn wasn’t an experienced singer — remains one of the film’s most memorable scenes, but it nearly didn’t make the cut. Hepburn would become the second-highest-paid actress in Hollywood with this film, her salary said to be $750,000. Not bad — although it’s worth noting that the black dress she wore in the film recently sold for nearly $1 million dollars at auction.

So successful was the Broadway version of this adaptation of George Bernard Shaw’s Pygmalion that Jack Warner paid a then unheard of sum of $5 million to secure the film rights (a record not broken until 1978 when Columbia shelled out a bunch of dough for another Broadway hit — Annie). It was money well spent, as the film would win eight Oscars and be a huge financial success. Hepburn went through extensive training in order to pull off so many singing numbers, only to see most of her performances overdubbed by Marni Nixon — a vocalist who also did uncredited work for the likes of Deborah Kerr in The King and I and Natalie Wood in West Side Story.

Produced by Hepburn’s then husband Mel Ferrer, Wait Until Dark was another Hepburn vehicle based on a Broadway play. It would be her last movie before she withdrew from the screen for nearly ten years, and she threw herself into the role of Suzy Hendrix — even going so far as enrolling in a school for the blind and learning Braille. One interesting bit of trivia — during World War II, 16-year-old Hepburn volunteered at a Dutch hospital and one of the patients she tended was a British paratrooper named Terrence Young — the same man who would more than two decades later direct her Oscar-nominated performance in this film.