Blonde bombshell Betty Grable wowed crowds in Technicolor musicals of the 1940s and ’50s, showing off her strong voice, skilled dancing and, of course, her million dollar legs.

The 1940s boasted many female film stars whose names are still with us today – Lana Turner, Judy Garland, Rita Hayworth, Ingrid Bergman, Hedy Lamarr – but some might be surprised to learn that the biggest actress of the decade was Betty Grable.

Born in 1916 in St. Louis the youngest of three children, Elizabeth Ruth Grable started acting at an early age. When she was 12, she played an adult chorus girl in the film Happy Days – a feat she pulled off with the help of a fake I.D. and the fact that she was performing in black face. She signed with Paramount Pictures and was given small, B-movie roles, appearing in more than 50 films throughout the 1930s. Notable among them was 1939’s Million Dollar Legs, memorable not because it was a great film, but because its title presaged the day when Gable’s legs would insured with Lloyd’s of London for over $1 million. (In the film, the pricey legs belong not to Gable but to a racehorse).

“There are two reasons I’m in show business,” Gable once quipped, “and I’m standing on both of them.”

Sick of playing mostly giggling coeds, she was considering leaving the business altogether when her Paramount contract expired. But then, in short order in 1939, Daryl Zanuck convinced her to sign for Fox and she also landed a role in the Broadway production of Cole Porter’s Du Barry Was a Lady – a part that showed she had acting skills beyond anything her Paramount years had hinted at. It was a year of changes professionally and personally, including her divorce from husband Jackie Coogan, who at the time was involved in an acrimonious suit with his parents over monies he’d earned as a child actor (and later would star as Uncle Fester on The Addams Family).

Grable joined Fox and became a leading lady. She would appear in many of the studio’s most successful films of the decade, beginning with 1940’s Down Argentine Way in which she costarred with Don Ameche.

Throughout the 1940s she churned out Techicolor musicals – Moon Over Miami, Springtime in the Rockies, My Blue Heaven, Mother Wore Tights (Grable’s personal favorite) – at a rate of 2 to 4 per year. I Wake Up Screaming, based on the novel by Cornell Woolrich, provided the only straight dramatic role of her entire career, while the delightfully titled Four Jills in a Jeep was a recreation of the USO tour undertaken by Kay Francis, Martha Raye, Carole Landis, Carmen Miranda and a few other Jills. “I’m a song and dance girl,” she once said. “I can act enough to get by – but that’s the limits of my talents.”

Among her most memorable roles was her last, when she appeared opposite Marilyn Monroe and Lauren Bacall in 1953’s How to Marry a Millionaire, in effect handing over the reigns as Fox’s resident bombshell to Monroe.

Though few movies on her résumé enjoy classic status, her run of box office successes rivals that of any actor in Hollywood’s history. From 1940 to 1951, she ranked among the top 10 box office draws each year (except 1946, when she didn’t appear in any movies). For eight of those years, she was the top drawing woman in Hollywood. For four of them, she held the No. 1 slot – male or female – beating out such luminaries as Gary Cooper, Humphrey Bogart, Veronica Lake and Bob Hope, just to name a few. At the height of her popularity, she received more than 12,000 fan letters a week. 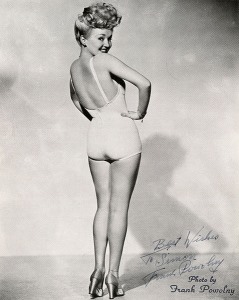 Her most lasting claim to fame, though, might be not as a movie star but as a pin-up girl. A photo of Grable taken by Frank Powolny in 1943 became a must-have for G.I.s serving in WWII. LIFE magazine included the image in its “100 Photos That Changed the World,” and Hugh Hefner gives it credit for inspiring him to start Playboy magazine. She purportedly posed for the photo with her back to the camera to hide the fact that she was pregnant when it was taken, a fact unknown to many of the young men who mooned over it at the time.

Grable would continue to work on TV and would also enjoy some late-career work onstage in Las Vegas. Her final billing came less than a year before her death, in a production of Born Yesterday at Alhambra Dinner Theatre in Jacksonville, Florida, a place where actors on the downward slope of their careers – Sal Mineo, Sandy Dennis, Pia Zadora, Vera Miles and Mamie Van Doren among them – could enjoy a few more moments in the spotlight. Grable died July 2, 1973, of lung cancer. She was 56.