Che Guevara: The Face that Launched a Thousand T-Shirts

More than 50 years ago, a photographer took a picture of a freedom fighter. It was a photo that would outlive both the artist and his subject, becoming one of the world’s most iconic images.

Alberto Korda’s photo of Cuban Marxist revolutionary Che Guevara, who would have turned 85 today, was striking enough it its original form. But when Korda cropped it, rotated it a bit, and upped the contrast to emphasize Guevara’s unruly hair and shadowed face, the image became unforgettable.

Today, Guevara’s image has become a staple of the T-shirt trade, adorning the chests of young rebels and fashionistas alike, as well as finding its way to hats, posters, jewelry, disposable lighters – and even, rather predictably, iPhone cases. Many who buy “Che chic” fashions know little of the man behind the photo – his deep love for the poor and desperate, his horror at the conditions under which they lived, and his willingness to use violence to empower them. They may not know that before he became a revolutionary, he earned a medical degree, or that Guevara’s birth name was the rather less-romantic Ernesto Lynch. And it seems unlikely that those who love to purchase consumer items with Che’s face emblazoned on them are aware that as a Marxist, he was deeply opposed to the very capitalism that makes the brisk T-shirt trade possible. 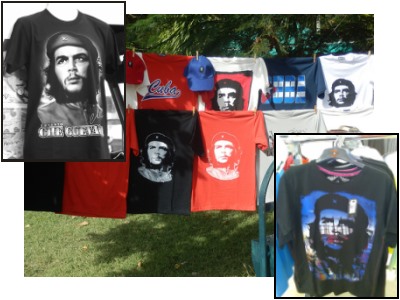 The irony of clothing companies making money on the image of a man who would have scorned their money-making venture may not be lost on Guevara’s most devoted fans. But his own daughter, Aleida Guevara, doesn’t have a problem with seeing her father’s iconic image used for profit, noting that those who gravitate to clothing items bearing his face tend to be iconoclasts and nonconformists, the ones who truly do understand what Guevara fought for. And she thinks her revolutionary father would have chuckled at the trend: “He probably would have been delighted to see his face on the breasts of so many beautiful women.”Written by Linnea Crowther