No matter how old or young you are, your pop culture has probably included Dick Clark in a prominent role.

No matter how old or young you are, your pop culture has probably included Dick Clark in a prominent role.

His iconic rock ‘n’ roll TV show, American Bandstand, ran for decades – and when it was done, Dick Clark wasn’t. He stayed in the game with TV specials like Dick Clark’s New Year’s Rockin’ Eve, radio shows like Rock, Roll & Remember, a chain of rock ‘n’ roll-themed restaurants, and much more. 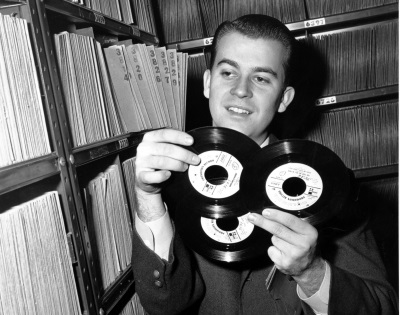 Dick Clark selects a record in his station library in Philadelphia, 1959 (AP Photo)

But it’s American Bandstand we love best… and it’s where we can best see how little Dick Clark changed over the years. Some laughed at his ever-youthful appearance, dubbing him “the world’s oldest teenager,” but over the course of four decades, he just kept on looking great – and loving pop music and culture. Here he is on Bandstand: one clip for each decade from the ’50s through the ’80s.

1976: An interview with John Travolta

1986: All eight of The Jets chat with Dick Clark

Clark died this morning at the age of 82, but he still remains timeless for us. Thanks, Dick Clark, for bringing us great music for all those years.