Ed Limato was a rarity in Hollywood — an agent who was genuinely liked by his clients and colleagues.

In July 2010, Hollywood said good-bye to one of its favorite behind-the-scenes players when mega-agent Ed Limato (1936 – 2010) was buried at Forest Lawn Memorial Park.

It was unfortunate that Limato’s death was not widely covered outside entertainment and business publications. He was a colorful character and — in an era when agents are typically depicted as ruthless forces of nature (Jeremy Piven as Ari Gold in “Entourage”) or foul-mouthed, sleazy creatures (Tom Cruise’s memorable turn as Lev Grossman in “Tropic Thunder”) — Limato seemed genuinely well-liked by the clients he served and by Hollywood at large.

An openly gay man, Limato never had children and saw his clients as his family, even keeping framed photographs of them in his home. “Ed was more than an agent,” Denzel Washington told Deadline Hollywood. “He was like a father to me and a dear friend to me and my entire family.” 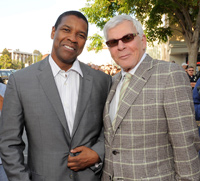