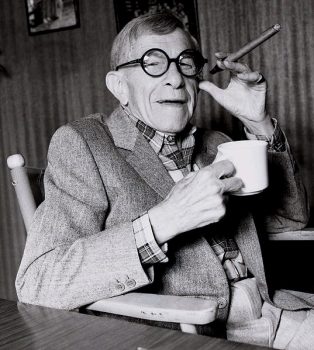 Of course, it’s not so – he began his showbiz career at the almost unimaginably young age of seven, singing with the Pee-Wee Quartet. He soon moved on to vaudeville, where he met his future wife and longtime partner on stage, radio and TV, Gracie Allen.

The duo were soon married, and they worked together until her death in 1964.

When Allen died, Burns didn’t hang up his career – he got through his grief by pouring himself into his work, and he continued on. He was 80 when he won an Oscar for his role in The Sunshine Boys.

George Burns once said, “The happiest people I know are the ones that are still working. The saddest are the ones who are retired.” And he kept himself happy all his life – his final feature film role was performed when he was 98.