Born April 19, 1933, Jayne Mansfield enjoyed success as a model, actress and singer before her untimely death. Here are 33 things you might not know about the celebrated sex symbol.

Born April 19, 1933, Jayne Mansfield enjoyed success as a model, actress and singer before her untimely death June 29, 1967. Here are 33 things you might not know about the woman who was one of the leading sex symbols of the 1950s.

1. Born Vera Jayne Palmer in Bryn Mawr, Pennsylvania, she lost her father when she was only 3.

2. After her father’s death, her mother remarried and the family moved to Dallas.

3. Mansfield learned to play the violin, and at age 7 enjoyed standing in the driveway performing concerts for anyone who would listen.

4. At 13 she went with her mother on a trip to Hollywood, where she dined at the Brown Derby and spotted a national radio star. After getting his autograph, she reportedly told her mother than one day people would be asking for her own.

5. She married Paul Mansfield when she was just 17. Not long after, she gave birth to their first and only child. With subsequent husbands, Mansfield would have four more children, including Mariska Hargitay, future Emmy-winning star of Law and Order: SVU.

6. She studied drama at both the University of Dallas and the University of Texas at Austin, but had to move to Georgia when her husband, an Army reservist, was relocated there before being deployed to fight in the Korean War.

8. Upon his return, her husband fulfilled a promise he had made by moving the family once more – this time to Los Angeles, so that Mansfield could pursue her acting ambitions. He lasted only four months in L.A. before divorcing Mansfield and returning to Dallas.

9. She studied at UCLA and got her first job working at a movie theater as a candy girl. Soon she was landing modeling jobs.

10. One of her first was for General Electric and featured her and a number of other young women in bathing suits. She was cut out of the final ad because G.E. felt she looked, according to photographer Gene Lester, “too sexy for 1954 viewers.” 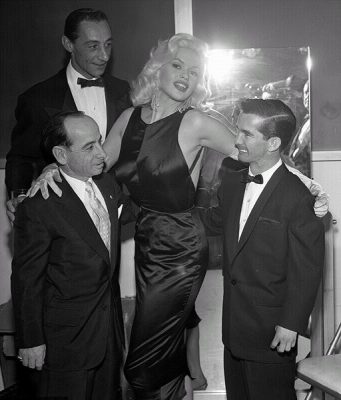 12. She turned down the honor of being named Miss Roquefort Cheese because she thought it sounded, well, cheesy.

14. She would appear inside the magazine’s pages another 30 times during her life.

15. Warner Brothers signed her to a 6-month movie contract in 1955. Her first movie was Female Jungle, a film noir that also starred Lawrence Tierney.

16. She became notorious in the press for staging publicity stunts that were a combination of what would now be termed photobombing and wardrobe malfunction. She famously crashed a Sophia Loren photo-op while spilling out of her dress, prompting one editorial writer to remark, “We are amused when Miss Mansfield strains to pull in her stomach to fill out her bikini better. But we get angry when career-seeking women, shady ladies, and certain starlets and actresses … use every opportunity to display their anatomy unasked.”

17. She boasted an impressive I.Q. of 163 and could speak five languages, though she was aware the public couldn’t care less. “They’re more interested in 40-21-35.”

18. In 1955 she enjoyed Broadway success as Rita Marlowe in Will Success Spoil Rock Hunter?, playing opposite Walter Matthau. She would reprise the role in the 1957 film.

19. Returning to Hollywood after her Broadway run, she signed a 6-year contract with 20th Century Fox.

20. Some industry insiders believed the studio did this largely in an effort to bring Marilyn Monroe in line by showing her she wasn’t the only blonde bombshell in town.

21. Mansfield’s first movie for Fox was The Girl Can’t Help It, which featured the music of Fats Domino, Little Richard, Gene Vincent and Eddie Cochran. The film would have a big influence on, of all people, Paul McCartney, who’d seen the movie and learned to play Cochran’s “Twenty Flight Rock.” McCartney played the tune for John Lennon, who then invited him to join his group The Quarrymen.

22. Mansfield’s performance in The Wayward Bus, a 1957 film based on a story by John Steinbeck, is generally considered the best of her career. A serious, dramatic role that didn’t lean on her sex bomb image, it earned her a Golden Globe for “New Star of the Year – Actress” over performers Carroll Baker and Natalie Wood.

23. She purchased a 40-room mansion once owned by Rudy Vallee, painted the outside pink and had the interior outfitted with pink lights, pink fur in the bathrooms, a heart-shaped bathtub and a fountain that spouted pink champagne.

24. In 1958 she starred in The Sheriff of Fractured Jaw, a spoof film by Raoul Walsh which required her to perform three musical numbers. The studio didn’t like her vocals and hired Connie Francis to overdub her singing parts.

26. Despite her limited singing ability, as good movie roles dried up she launched a career performing at The Dunes in Las Vegas. The show was such a hit that Fox recorded it and released an album called Jayne Mansfield Busts Up Las Vegas.

27. Mansfield also released a novelty record called Shakespeare, Tchaikovsky and Me, in which she recites the bard’s sonnets with the Russian composer’s music in the background.

28. A pre-stardom Jimi Hendrix collaborated with Mansfield, playing guitar and bass on two songs she recorded in 1965 but did not release.

30. She was offered the role of Ginger in Gilligan’s Island, but turned it down because she felt the role was the kind of stereotype from which she wished to distance herself.

32. Those rumored to have had affairs with Mansfield include John F. Kennedy, Robert F. Kennedy, and Church of Satan founder Anton LaVey.

33. Mansfield died June 29, 1967, in Mississippi on when the car in which she was riding rear-ended a tractor-trailer. After her death, the National Highway Transportation Safety Administration began requiring tractor trailers to have an underride guard, a safety feature which became known as a “Mansfield bar.”