Julia Child exposed a generation of American housewives to the world of fine eating, as well as the rigors and joys of preparing food as an art form.

Despite becoming the most well-known cook in America with a television career that spanned decades, Julia Child’s most iconic moment onscreen was the result of a mistake. A potato cake she was trying to flip came to pieces, part of it landing outside the pan. “I didn’t have the courage to do it the way I should have,” she confessed to her audience, pressing the cake back together in the pan. “But you can always pick it up, and if you’re alone in the kitchen, who is going to see?”

Who is going to see? Plenty of people, if you’re Julia Child. For 10 years her kitchen served as the setting for cooking show The French Chef, broadcast on 96 public television stations. Child exposed a generation of American housewives to the world of fine eating, as well as the rigors and joys of preparing food as an art form. And she did it with her characteristic combination of droll wit, do-it-yourself empowerment, and willingness to sometimes look foolish.

In an age with an entire TV channel devoted to food, where celebrity chefs go on national book tours, appear in reality show competitions, daytime talk shows and even sitcoms, it’s easy forget that it wasn’t always this way. The French Chef wasn’t America’s first cooking show, but for her tremendous pioneering influence Child has justifiably been called the “queen of small screen cuisine.” 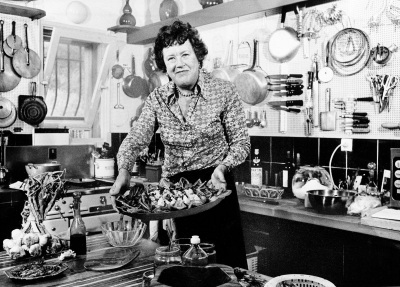 Julia Child showing a salade nicoise she prepared in the kitchen of her vacation home in Grasse, southern France. More so than the tools and techniques she popularized, Child’s most lasting legacy may be her spirit and sense of humor. That was the conclusion of several chefs and food magazine editors asked to describe Child’s memorable contributions to American home cooking as a new movie about her life was about to open. (AP Photo)

Amazingly, she didn’t even start cooking until she was already older than many of the contestants on Top Chef. Beneficiary of a privileged West Coast upbringing, she’d struggled to find her true passion in life, working for a time as an ad copywriter in New York before joining the OSS (a precursor to the CIA) after the outbreak of World War II. Eventually she wound up in what is now Sri Lanka and there met the love of her life, a worldly and sophisticated State Department worker named Paul Child who was ten years her senior. The pair eventually moved to France, and it was while en route to Paris that Paul treated her to the meal which would shape the rest of her life.

“The whole experience was an opening up of the soul and spirit for me,” she said of her lunch at La Couronne, the oldest restaurant in France. “I was hooked.” Soon thereafter, at age 36 she enrolled in the famous Le Cordon Bleu cooking school and immersed herself in every aspect of French cuisine, from roasting pigeons to selecting the proper wines to haggling with local fishmongers.

While in Paris she met Simone Beck and Louisette Bertholle, two French women who were working on a cookbook to be published by Putnam for American readers interested in French cuisine. Together, the three founded the informal cooking school L’Ecole des Trois Gourmandes (The School of the Three Happy Eaters) where they tested their recipes on American women living in Paris.

Beck and Child would continue to work on the book for nearly a decade, even as Putnam dropped the project and Child moved back to the U.S. The book was picked up by Houghton Mifflin, but when it came in at over 700 pages, they rejected the manuscript. Finally, in 1961, Alfred Knopf published Mastering the Art of French Cooking. The book sold more than 100,000 copies within one year of publication. Now in its 47th printing, it is considered indispensible for the serious chef and dabbling cook alike.

While promoting the book, Child agreed to appear on Boston’s local WGBH TV show I’ve Been Reading and demonstrate how to cook an omelet. It was surely the most important omelet she ever prepared as the appearance would not only change her life, but impact television and the culinary arts for decades.

No one looked less like your typical glamorous television star than Child. She was dowdy by TV standards and had been self-conscious about her height since she was a teenager. Set designers addressed the latter issue by constructing countertops sized to prevent her 6-foot-2-inch frame from constantly stooping. And then there was her distinctive and oft-parodied voice, a warble capable of octave-jumping operatic sweeps when she got excited. Some viewers assumed she was half-drunk, unaware that the glasses of wine she sipped onscreen were actually Gravy Master mixed with water. Dan Akroyd’s impression of Child in a Saturday Night Live skit co-scripted by Al Franken remains a classic, and was a favorite with its subject as well. Good-humored Child reputedly kept a copy on videotape to show visiting guests.

Though The French Chef stopped shooting new episodes in 1973, Child continued to be an educating, entertaining and encouraging presence on American television, making regular appearances on Good Morning, America, hosting Julia Child and Company (1978-79), Julia Child and More Company (1980-82), Cooking with the Master Chefs (1993-1994) and Julia and Jacques Cooking at Home (1999-2000), to name but a few. She also authored more than a dozen books, including one published posthumously. My Life in France, compiled by her husband’s grandnephew, covers those formative experiences that turned her into a lifelong ambassador of French culture. “I loved the people, the food, the lay of the land, the civilized atmosphere, and the generous pace of life,” she wrote. The French loved her right back, awarding her France’s highest honor, the prestigious Legion d’honneur, in 2000.

The book would serve as one half the inspiration for Julie & Julia, a Nora Ephron-directed film starring Meryl Streep as the beloved chef. The other half is based on Julie Powell’s best-selling book, a compilation of her blog documenting her efforts to work her way through every recipe in Mastering the Art of French Cooking over the course of a single year. The film opened just short of the 5-year anniversary of Child’s death, receiving critical acclaim and taking the No. 2 spot at the weekend box-office.

As long as people love food and cherish unique personalities who find a way to make their dreams come true against the odds, Julia Child will always be with us.