By Legacy Staff May 21, 2012
0
FacebookTwitterEmail

Robin Gibb and his brothers leave a musical legacy like few others. Their music dominated the disco era.

We knew Robin Gibb had been very sick, battling cancer since late last year. But when he successfully fought his way out of a coma one month ago, we cheered for him, hoping he would continue the rise back to good health.

{{embed:node:api/v1.0/url/quote/robin-gibb/robin-gibb-quote}}Sadly, Gibb died yesterday, 20 May 2012, just a few days after the death of another disco icon, Donna Summer. Robin was the third of the Gibb brothers to die – his twin brother Maurice passed away almost 10 years ago and younger brother Andy died in 1988. But Gibb and his brothers leave a musical legacy like few others. The Bee Gees – with Robin, Maurice and Barry Gibb – dominated the disco era, both as singers and as songwriters. Indeed, after Lennon and McCarthy, they’re the second most successful songwriting team in the history of British music.

Advertisement
We think of the Bee Gees mainly as disco superstars, but true fans know that they had a solid career long before Saturday Night Fever propelled them to wild international celebrity. Their first hit single, “Spicks and Specks,” came almost 10 years earlier – and it sounds very different from the Bee Gees’ late-1970s disco groove:

Robin Gibb found success as a solo artist as well as with his brothers. He first broke off on his own in 1969, rising to No. 2 on the British charts with “Saved by the Bell.”

The brothers reunited in the early ’70s, but it took them a few years to hit the stride that would carry them to the top of the charts. Then in 1975 a new direction panned out when the funky, danceable “Jive Talkin’” became a massive hit, reaching No. 1 in the US and No. 5 in the UK.

And then, of course, there was Saturday Night Fever. In America three of the Bee Gees’ own songs from the album hit No. 1 on the Billboard Hot 100, plus one written for Yvonne Elliman (“If I Can’t Have You”). “Stayin’ Alive,” “Night Fever” and “If I Can’t Have You” were also huge internationally, topping charts in the UK, Australia and beyond. The songs are all fantastic, but the one that practically defines the disco era is “Stayin’ Alive.”

Robin Gibb remained with the band off and on through the years, also continuing his own solo career. He showed his ability to change with the times in 1983, recording the very New Wave single “Juliet.”

Robin Gibb kept making music – most recently The Titanic Requiem, which was written with his son and debuted just this year on the 100th anniversary of the Titanic disaster – until illness prevented it. We’ve got Robin and his brothers to thank for some of the sounds that shape our memories. 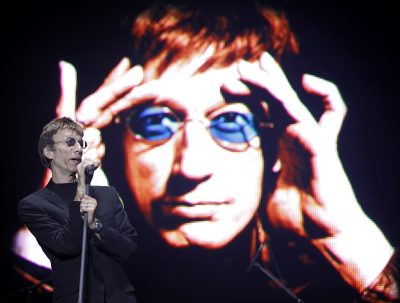