“Paint what you love” a friend once advised Andy Warhol – and that’s exactly what he did.

Iconic pop artist Andy Warhol would have turned 85 today. We look back at Warhol’s appreciation for the simple things.

Andy Warhol loved to turn the mundane into art.

It all began when Warhol, already a successful commercial illustrator, was looking for a way to distinguish himself from other pop artists of the day. A friend suggested he should paint the things he loved. For inspiration, Warhol turned to a favorite lunch, which he claimed to eat almost every day of his life.

The Campbell’s Soup Cans were displayed at Warhol’s first major exhibition, and in less than 10 years, the painting brought $10,000 at auction. It was just the tip of the iceberg for the commercial success of his work: paintings like these are valued in the millions today, with his Eight Elvises (featuring Elvis Presley) selling for $100 million just a few years ago.

Among Warhol’s other loves was celebrity – it showed in the way he gathered luminaries around himself, and again in his paintings. 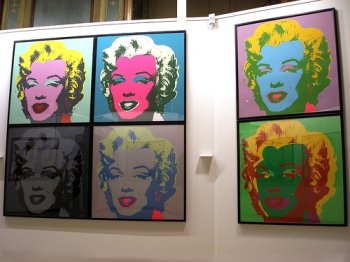 Andy Warhol didn’t want the public to read anything too deep into his work. He wasn’t sending a message about consumerism or fame or anything else – just painting what he loved, however humble it might be. In his own words, “Just look at the surface of my paintings and films and me, and there I am. There’s nothing behind it.”

His examination of the mundane things he loved went beyond the canvas. His experimental films also delved into the everyday, showing things like six hours of a poet sleeping, eight hours of the Empire State Building, and even a few minutes with the artist himself eating a hamburger.

Twenty-five years after Andy Warhol’s death, his work still excites many, while it prompts others to scratch their heads and say, “I don’t get it.” Those folks can take their cue from Warhol himself: don’t look too deeply: just enjoy the surface.