The Last of the Film Noir Women

During the heyday of film noir, the 1940s and ’50s, dozens of actresses made their mark on the genre. Some were just passing through, taking a single noir role on the way to stardom in other genres – Lucille Ball in The Dark Corner, Doris Day in Julie. Others were film noir’s great femmes fatales, the women who made noir great: Lauren Bacall, Gloria Grahame, Veronica Lake, Joan Crawford. When Coleen Gray, perhaps the last surviving woman of noir, died in August 2015, an era ended.

During the heyday of film noir, the 1940s and ’50s, dozens of actresses made their mark on the genre. Some were just passing through, taking a single noir role on the way to stardom in other genres – Lucille Ball in The Dark Corner, Doris Day in Julie. Others were film noir’s great femmes fatales, the women who made noir great: Lauren Bacall, Gloria Grahame, Veronica Lake, Joan Crawford.

Those ladies of noir are all gone now. Stunning beauties all those years ago, they’ve all died over the decades – Veronica Lake in 1973, Bette Davis in 1989, Claire Trevor in 2000, Lizabeth Scott just months ago, in January 2015. When Coleen Gray, perhaps the last surviving woman of noir, died Aug. 3, 2015, an era ended.

Film noir launched Gray’s career, with her first substantial roles coming in 1947’s Kiss of Death and Nightmare Alley, and she continued playing noir roles throughout the years of the genre’s great popularity. According to Gray’s obituary in The New York Times, she dreamed of playing femmes fatales like other great ladies of noir, but her girl-next-door looks made her a tough sell as a hard-boiled dame or a Mata Hari type. She ended up playing love interests, sweet girls who contrasted with the scheming women played by Claire Trevor and the like.

Gray was frustrated about not getting her dream roles, but she was also a good sport, bringing her love of film noir to her parts regardless of her casting. That love showed, and she became as much a star of noir as the femmes fatales were. Though she would go on to take noted roles in several Westerns, as well as other genres of films and a number of TV shows, it’s in the moody black-and-white settings of noir films that her fans remember her best. Here are scenes from a few of Gray’s great noir roles. 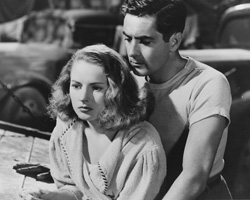 In one of Gray’s first films, her leading man was Tyrone Power, not a typical noir star himself – the actor was more likely to be seen swashbuckling than lurking in a dark alley. But he lobbied hard for the role, wishing to broaden his range, and he and Gray (photo courtesy of David Schecter) made a striking pair set against the backdrop of a traveling carnival. Gray’s good girl was paired romantically with Power’s con man, but she wouldn’t have anything to do with his schemes. Nightmare Alley is, today, considered one of the great noir classics, with an impressive 100 percent fresh rating on the film review site RottenTomatoes.com.

It’s got a classic noir title and a classic noir plot, casting Gray as the daughter of a dirty ex-cop who’s leading a long con, unbeknownst to his little girl. But it was atypical in that it didn’t feature a femme fatale or bad girl of any sort – Gray was the film’s only major female character, and she was, predictably, a good girl: the love interest of the film’s hero (who was, admittedly, an ex-con – but an ex-con with a heart of gold). Gray gets good reviews for the performance, though her part is fairly slim.

One of writer and director Stanley Kubrick’s earliest films, The Killing stars Sterling Hayden as a criminal and Gray as his fiancée, Fay – a good girl, of course, though quite not as clueless about the crime world as some of Gray’s previous noir characters. Fay gets caught up in the action in the end, despite agreeing to stay out of the fray. The film didn’t do particularly well at the box office, but in retrospect, it has become a cult favorite, much admired by Kubrick’s many fans.

By the time The Killing opened in the spring of 1956, the classic era of film noir was almost over. Gray would star in no more films noir, and crime films would tend toward a new twist in the swinging ’60s. But for decades since, moviemakers who love film noir have returned to the genre’s roots, creating noirs for new generations. 1962’s Cape Fear came just after the genre’s heyday, while 1992’s Basic Instinct gave us a femme fatale for the ages in Sharon Stone. 1997’s L.A. Confidential went old school, harking back to the classics with its look and 1950s setting, and just this year, Ex Machina gave noir a slick new look and feel … as well as a new breed of nonhuman femmes fatales. All these years after the height of noir, the work of Coleen Gray and the other women of noir continue to inspire and influence new movies.