“It” was the only way to describe Clara Bow’s unmatchable magnetism.

These days, “It Girls” are heavy on the ground – it seems like there’s a dazzling new young star every week: from Blake Lively, Selena Gomez and Elizabeth Olsen (younger sister of former “It” gals Mary-Kate and Ashley) to Emma Stone, Jessica Chastain and not-so-new girl Zooey Deschanel…

But 85 years ago, that wasn’t the case – the movie industry was still young, films were silent, and movie stars were fewer and farther between. The term “It Girl” was brand-new, coined in response to Clara Bow and her star turn in 1927 hit It. “It” was the only way to describe Bow’s unmatchable magnetism.

So, what made Clara Bow an “It Girl” – or rather, the It Girl? Looks were a big part of it, to be sure. Bow’s lovely features and stylishly cropped hair caught the eye of many a moviegoer. She was a trend-setter, too, prompting a henna sales explosion when female fans learned she colored her hair red with the plant. 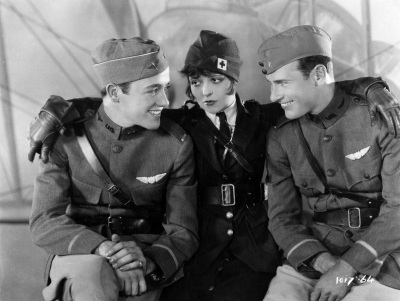 But there was more to “It” than looks. “It” was also about personality, vivaciousness, charm. An “It Girl” was somebody you – whether you were male or female – couldn’t resist, and that irresistible quality came across when Bow was on screen. Bow loved playing to the camera and thus was well-suited to silent film acting. “I hate talkies,” she once said. “They’re stiff and limiting. You lose a lot of your cuteness, because there’s no chance for action, and action is the most important thing to me.”

But even in talkies, Clara Bow still had It. She starred in only a few of them, but her fans loved hearing her talk… and sing.

After just a few years of talkie success – and plenty of wild rumors about her personal life, including a false but persistent one about the USC football team – Bow retired from acting, done with her movie career but pleased with the memories (“I’m sorry for a lot of it but not awfully sorry.”). Clara Bow died 47 years ago today… but in our memories, she’s still got It.