How well do you know former president Gerald Ford?

1. President Leslie? He wasn’t born Gerald Ford – his birth name was actually Leslie Lynch King Jr. His biological father reportedly abused his mother, and they divorced shortly after young Leslie was born. When his mother remarried, she began calling her 3-year-old son after his stepfather, Gerald Ford. There was never an official adoption, and Ford didn’t legally change his name until 1935. Though “President Leslie King” has a nice ring to it, we’re glad our former president had a kind stepfather, one whom he called a “magnificent person” and whose name he was proud to take.

2. Eagle Scout. As a boy, Ford joined the Boy Scouts of America, attaining its highest rank, Eagle Scout. In fact, he is the only U.S. President to have been an Eagle Scout. Scouting was so important to Ford that at his funeral, an honor guard of about 400 Eagle Scouts stood watch during the procession.

3. Gridiron Giant. At the University of Michigan, Ford was the star of the football team. As center and linebacker, he helped the team to two undefeated seasons and national titles in 1932 and 1933. Ford remained devoted to UM football all his life, often asking the Naval band to play his team’s fight song instead of “Hail to the Chief” before state events. Ford made a name for himself in politics, but he could have found fame in a different arena – if he’d accepted offers to play with the Detroit Lions or the Green Bay Packers.

4. Frat Boy. When he wasn’t playing football, Ford could be found at the frat house – washing dishes. He was a member of the Delta Kappa Epsilon fraternity where he also worked in the kitchen to earn spending money.

5. Law Student. After graduating with a BA in Economics in 1935, Ford took a job coaching football at Yale, where he also hoped to attend law school. But Yale liked him too much as a coach – they rejected his law school application so he could devote his time to the team. Undeterred, Ford applied again and this time got in. He earned his law degree in 1941, passed the bar, and soon began practicing back in Michigan.

6. Navy Man. Ford’s law career didn’t last long. Less than a year after he hung out his shingle, Pearl Harbor was attacked. The young lawyer joined the U.S. Navy and served in the Pacific Theater, where he narrowly escaped death during a typhoon that capsized other nearby destroyers and took the lives of hundreds of servicemen. 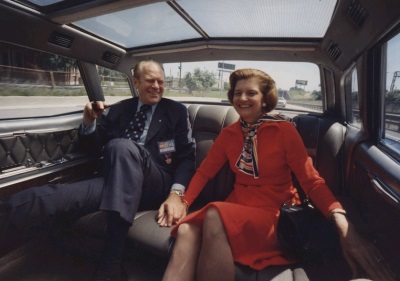 7. Devoted Husband. On October 15, 1948, Ford married Elizabeth Bloomer Warren – we know her, of course, as Betty Ford. At the time of their wedding, Ford was campaigning for a seat in the U.S. House of Representatives. The nuptial event was postponed until just before the election, as he wasn’t sure how his marriage to “a divorced ex-dancer” would affect his campaign. As it turned out, Betty Ford was one of the things the public loved best about Gerald Ford. A strong and interesting woman, she was candid about her political views. She was also open about her love for her husband – and he was never shy about expressing his affection for his wife, either.

8. Career Politician. Shortly after his wedding day, Ford won that House of Representatives election and continued to hold the seat for 25 years. When urged to run for governor of Michigan or for a Senate seat, he declined. His ambition was to rise to become Speaker of the House. But when he became House Minority Leader in 1964, he put himself in position for an even higher office.

9. Accidental President. When Spiro Agnew resigned the vice presidency in 1973 after he was rocked by a tax evasion scandal, Ford was elected by the Senate to replace him. Just a few months later, Richard Nixon resigned the presidency in the heat of the Watergate affair. Ford ascended to the nation’s highest office, along the way becoming the answer to a popular trivia question – he was and remains the only U.S. president never elected by the voting public to either the presidency or the vice presidency.

10. A Quiet Legacy. Ford may not be remembered for sweeping changes during his presidency, but then, he assumed the office at a time when the last thing his country needed was more fuss. In the wake of Watergate, Ford’s quiet, calm presence was perhaps the best thing for the U.S. And his pardon of Nixon, while unpopular at the time, helped put the nation back on the road to recovery. Ford’s notable calm may have been beneficial to the president as well – when he died on December 26, 2006 at the age of 93, he had lived longer than any other U.S. president.