Frida Kahlo’s deeply introspective self-portraits put her into a class of her own. Here, we explore the symbolism behind four works of art.

Frida Kahlo is one of the best-known artists of the 20th century. Her work is instantly recognizable, particularly the self-portraits that have made her bold-browed face familiar across the world. Those self-portraits put Kahlo into a class of her own, as few other artists have approached the form with such deep introspection.

Below, we explore the context, symbolism and hidden meaning behind four of Kahlo’s self-portraits. 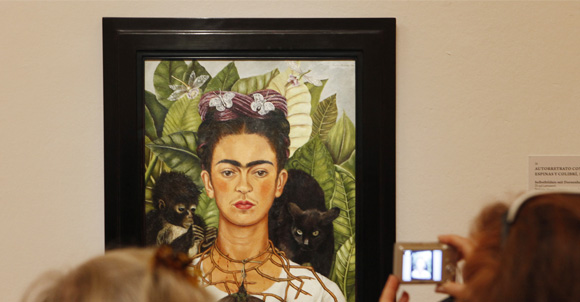 This is, for many, the one painting that’s inextricably associated with Kahlo. Painted in 1940, it includes elements common to much of her work: the painter’s own face, unflinchingly portrayed (more than one third of her works were self-portraits); tropical flora; the frequently-present monkey… and blood. The thorn necklace around Kahlo’s neck cuts into her skin and drops of blood trickle down her throat – her stoic expression suggests she’s quietly bearing the pain. That may be a reflection of her real life pain, which plagued her throughout adult life after she was severely injured in a bus accident as a young woman. 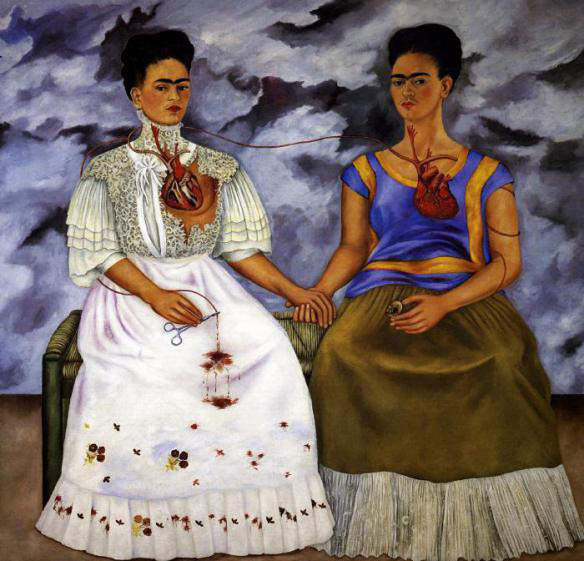 Two sides of Kahlo are on display in this paining. On the left, she appears in a fussy, frilly European-style dress, while on the right she wears a traditional Mexican style of apparel. The two figures are joined, literally, by blood: their exposed hearts share the same veins, twining around their arms and bodies. The Frida on the right holds a portrait of her husband, Diego Rivera, from whom she was briefly divorced at the time this painting was made in 1939 (they remarried in 1940). The Frida on the left holds a medical clamp on the bleeding vein she shares with the Frida on the right. There are two sides to the same woman on display here: One is European and one is American (Kahlo was the daughter of a German father and Mexican mother); one wears modern dress and the other traditional (Kahlo adopted more traditionally-Mexican dress and hair styling when she married Rivera); one pines for her lost love while the other dispassionately clamps down on her bleeding heart. But the two sides hold hands, united as one woman.

3. My Grandparents, My Parents and Me (Mis abuelos, mis padres y yo) 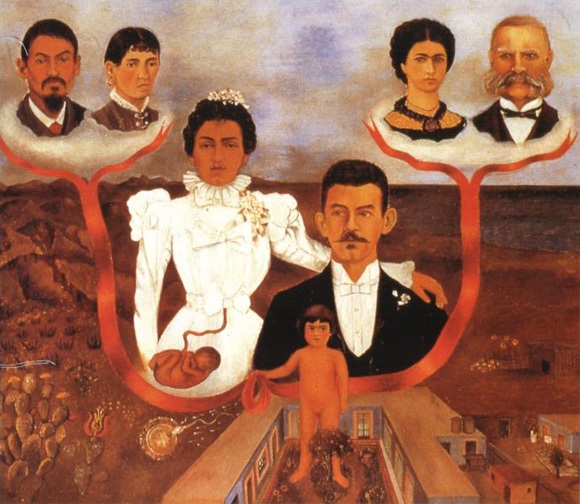 Unusual among Kahlo’s self-portraits, this painting depicts her not as a grown woman but as a child (and also as a fetus). She’s the naked little girl in the painting’s center, against a backdrop of her homeland and her ancestors. Arranged like a family tree, the painting includes her parents – with Frida in her mother’s womb, and sperm fertilizing an egg below – with her grandparents behind them, floating in beds of clouds evocative of religious paintings that were likely a presence in her childhood home. Her Mexican maternal grandparents are painted at the left – west – of the image, hovering over land, while her German paternal grandparents are at the right – east – hovering over the ocean. We see family resemblances in her paternal grandmother’s heavy brow, her father’s wide eyes, her mother’s slim figure. 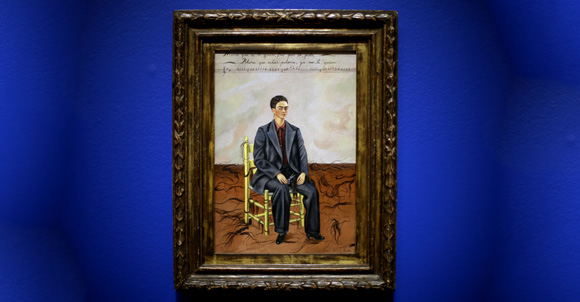 Like The Two Fridas, Self-Portrait with Cropped Hair was painted during the short period during which Kahlo and Rivera were divorced in 1939 and 1940. Both paintings show Kahlo’s grief and discomfort in the wake of her lost love. Dressed in an oversized suit – perhaps one belonging to Rivera, a big man – she is surrounded by twisted, vein-like locks of her own shorn hair. The disquieting scene helps explain why Kahlo’s work was beloved by the Surrealists (she herself didn’t embrace the Surrealist label that was sometimes given to her work, believing that her work reflected her own reality, strange though it often was). The verse at the top is from a Mexican song and translates: “Look, if I loved you it was because of your hair. Now that you are without hair, I don’t love you anymore.” Kahlo holds scissors, making it clear that she cut her own hair and made the verse into truth herself.