On the 2nd of March back in 1904, a child who’d grow up to work wonders was born. His name was Ted Geisel, but we call him Dr. Seuss.

On the 2nd of March back in 1904,A child who’d grow up to work wonders was born.His name was Ted Geisel, but we call him Seuss,And here’s what he’s done since that early March Deuce.

He wrote 52 books under that dear penname,And who drew the pictures? Why one and the same.From Green Eggs and Ham to The Cat in the HatHe helped kids to read just as easy as that.For who wouldn’t want to learn letters and wordsBy reading of Seuss’s strange creatures and birds?King Yertle the Turtle and Cindy Lou Who,The Grinch and the Lorax and the Zinn-a-zu,Horton and Oobleck and Thidwick the MooseAre a few of the creatures drawn by Dr. Seuss.But that’s common knowledge – we all know these books.So what else did Seuss do that merits a look?He first started drawing when just a young buck –In Dartmouth’s school mag, his humor ran amok.He wrote many jokes until, caught drinking gin,He was banished from gracing the pages within.But the clever young rebel just couldn’t be tamed –He kept right on writing, with brand-new penname.Once his middle name, it rhymes with “rejoice.”So really, we all should be calling him “Soyss.”But Ted didn’t mind being called “Dr. Soos”;He liked that it rhymed with good old Mother Goose.When college was over, he worked drawing adsFor insect repellent and electric doo-dads.His ads made him famous for art and quick wit,His slogans well-known: “Quick, Henry, the Flit!”With World War II looming, he next drew cartoons,Political ones where he drew as buffoonsThe folks who sat back, ignoring the war;Ted thought we should fight and give Hitler what-for.He drew propaganda, both posters and movies;His work for his country was treasured like rubies.But while he was working for country and freedom,His love of the silly still couldn’t be beaten.He drew pictures magical, wondrous and freakyAnd then added verse in a meter quite cheeky.His first published book brought success oh-so-sweet:And to Think That I Saw It on Mulberry Street.Though 43 publishers wouldn’t give bids,He finally found one who understood kids.The children all loved what Doc Seuss could imagine,But it wasn’t just kids who would gain satisfaction.Seuss wrote books for grownups, though not so well-known –But why should we stop loving rhymes when we’re grown?We read them to babies, and then when they smile,We once again feel like we’re kids for a while.If reading these rhymes tends to make you feel young,It’s Seuss you can thank for keeping books fun. 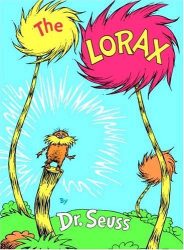 Dr. Seuss and the Muppets