The 1952 Olympics were the second most record-breaking Olympic Games of all time – and one of the brightest record-smashing stars was Bob Mathias.

In 1952, the world’s eyes were on Helsinki, Finland, as they prepared to host the Games of the XV Olympiad. But as the games got underway, attention naturally shifted to the athletes – and to the many records they broke. With 28 new Olympic records and nine new world records, the 1952 Olympics became the most record-breaking games (a title that held until Beijing 2008) – and one of the brightest record-smashing stars was Bob Mathias. 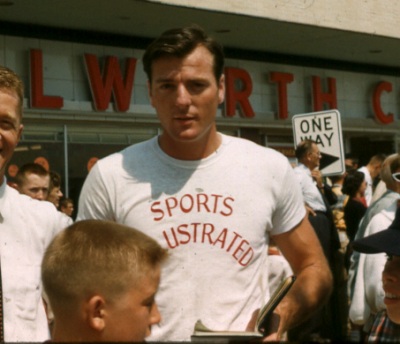 It was Mathias’ second Olympics – he previously competed in the 1948 games in London, where he became the youngest athlete ever to win gold in track and field. He took that gold at age 17, unhindered by his woeful lack of knowledge about the decathlon (not aware of the rules, he nearly fouled out of the shot put portion). In Helsinki in 1952, Mathias was savvier, more ready to win – and he did, again, making him the first athlete ever to successfully defend a decathlon title. In fact, he destroyed the competition, winning by the impressive margin of 912 points.

1952 was a very good year for Bob Mathias. In addition to his Olympic gold, he led the Stanford University football team to a Rose Bowl appearance. But it was also his final year as a competitive athlete – he retired after the Olympics. It was not, however, the end of his time in the spotlight.

In the 1950s, Mathias pursued an acting career. It began when he and his wife played themselves in The Bob Mathias Story and culminated in a one-season starring role on the NBC series The Troubleshooters.

Next up for Mathias was a political career. He was elected to four terms in the U.S. House of Representatives, representing California’s San Joaquin Valley as a Republican. After his time in Congress ended, he became the first director of the United States Olympic Training Center, helping the athletes of tomorrow make their own attempts on records like his.

Bob Mathias died almost six years ago, and we can’t help looking at his legacy as we focus on this year’s London Olympics. It’s record-breakers like him that inspire Olympians – and regular folks like us – to reach for those dreams.