Patsy Cline became one of the great legends of country music despite her tragically short life. One of the first female stars of the genre, she made history with songs including “Crazy,” “Walkin’ After Midnight,” and “I Fall to Pieces.” She was a mentor and nurturer to other young women of country music, helping boost the careers of future stars like Loretta Lynn and Dottie West. Cline’s career was still at its height when she was killed in a plane crash at 30. We remember Cline’s life today as well as the lives of other notable people who were born this day in history.

Click to discover notable people who died this day in history including the multitalented Dorothy Dandridge.

1947: Benjamin Orr, U.S. singer and bassist with the Cars, who sang lead on hits including “Just What I Needed” and “Bye Bye Love,” is born in Lakewood, Ohio.

A six-time Pro Bowler and two-time All-Pro, Greenwood played for the Steelers from 1969-81, helping Pittsburgh win an unprecedented four Super Bowls in a six-year span. Greenwood, Joe Greene, Ernie Holmes, and Dwight White formed the bedrock of the defense that helped turn a perennial loser into a dynasty. Read more

1945: Kelly Groucutt, English bassist and singer with the Electric Light Orchestra, is born in Coseley, England.

1945: Ron “Pigpen” McKernan, U.S. musician who was a founding member of the Grateful Dead, is born in San Bruno, California.

1932: Patsy Cline, U.S. country music singer-songwriter who had hits including “Crazy” and “Walkin’ After Midnight,” is born in Gore, Virginia. 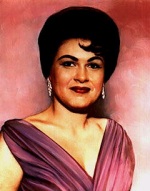 It wasn’t just her music that made her a trailblazer who opened the door for other women to join the ranks of country music’s superstars. Her kind nature was almost as important – at the same time that she inspired young female singers with her music, she opened her heart to them, befriending them, encouraging them, even helping them out with expenses while they got their careers established. She was deeply loved and respected by the singers who followed in her footsteps – Loretta Lynn, Brenda Lee, Dottie West, Barbara Mandrell, and many more. Read more

1925: Peter Sellers, English actor well-known for films including “Dr. Strangelove” and “The Pink Panther” series, is born in Southsea, England.

It all started in 1963 with “The Pink Panther.” But the collaboration between Sellers and the director Blake Edwards almost didn’t happen – Peter Ustinov originally was cast in the role of Inspector Clouseau, but Sellers jumped in as a last-minute replacement. The movie was intended to showcase David Niven, who played a lord who lives a secret life as an international jewel thief known as the Phantom. Inspector Clouseau was merely a supporting character, but Sellers’ rendition of the clueless detective – who thought he was perhaps the greatest detective in the world – stole the show. As Edwards later recalled, he was very unhappy when Ustinov backed out, “but as fate would have it, I got Mr. Sellers instead of Mr. Ustinov – thank God!” Read more

Sid Caesar, star of “Your Show of Shows,” helped to create sketch comedy on television. When he and his troupe took to the air in 1950, there was nothing quite like them anywhere on the air. They put up 90 minutes of live sketch comedy each week and redefined what was possible on the new medium. Read more

1915: Frank Cady, U.S. actor who had roles on TV shows including “Green Acres” and “The Adventures of Ozzie and Harriet,” is born in Susanville, California.

Cady played Sam Drucker, one of the less loony denizens of Hooterville on “Green Acres.” The show, about a Manhattan couple who left the big city to live in a rundown farm, ran from 1965 to 1971. Cady also played the same character in “Petticoat Junction” and “The Beverly Hillbillies.” Read more

1897: Jimmie Rodgers, U.S. country music singer who was a pioneer of the genre and was known for his yodeling style, is born in Meridian, Mississippi.

1841: Antonin Dvorak, Czech composer whose well-known works include his symphony “From the New World,” is born in Nelahozeves, Bohemia.

Click to discover notable people who died this day in history including the multitalented Patsy Cline.