On Jan. 28, 1986, teacher Christa McAuliffe nearly became the first civilian in space. As America watched in horror, the Space Shuttle Challenger exploded shortly after lift-off, killing McAuliffe and her six fellow astronauts. The tragedy captured worldwide attention and, decades later, remains emblazoned in our national consciousness. Here are 25 things you might not know about McAuliffe and her mission aboard the Space Shuttle Challenger.

1. She was born Sharon Christa Corrigan in Boston, Massachusetts, Sept. 2, 1948, the oldest of five siblings.

2. Her father was an accountant, her mother a substitute teacher.

3. She was inspired by Project Mercury, America’s first manned space flights, and a childhood friend recalled her predicting buses would one day drive across the moon.

4. In 1966, she graduated from Marian High School in Framingham, Massachusetts, where she was a standout softball player.

5. She graduated from Framingham State College with bachelor degrees in American history and secondary education in 1970.

7. In 1978 she received a Master’s degree in education from Bowie State College in Maryland.

8. She later got a job at Concord High School in New Hampshire, where in addition to teaching law, economics and American history, she developed a course called “The American Woman.”

9. McAuliffe was a popular teacher, known for being enthusiastic and skilled at making difficult subjects understandable. She also liked to take her students on field trips.

10. In 1983, after a number of highly successful Space Shuttle missions, NASA decided it was time to take an ordinary American in space to act as a “citizen-observer.” NASA hoped it would help win broad public support for the agency in order to keep its space missions well-funded. 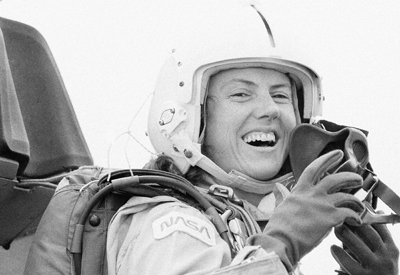 11. President Ronald Reagan came up with the idea of sending a teacher into space, partly as a way to underscore the crucial role educators played in America.

14. Of those applicants, 114 were selected for the next round. During a trip to Washington D.C., they were interviewed by a panel that included former astronauts, university presidents, artificial heart inventor Robert Jarvik, and actress Pam Dawber of Mork & Mindy fame.

15. Ten finalists were then selected for a week of medical tests, briefings about space flight, and interviews with NASA officials at the Johnson Space Center in Houston.

16. On July 19, 1985, Vice President George Bush announced that Christa McAuliffe had been selected to be the first ordinary citizen in space. Her backup would be Barbara Morgan, an elementary school teacher from Idaho. More than twenty years later, Morgan would get her chance to go into space as part of the crew for a space shuttle flight in August 2007. 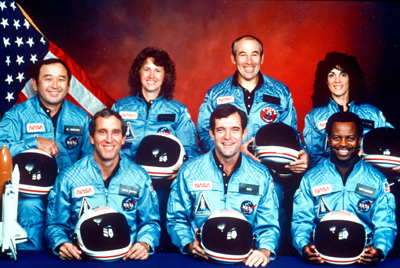 Crew of the space shuttle Challenger

18. While in orbit, McAuliffe was planning to teach two 15-minute lessons to be broadcast by PBS covering what life was like inside the Space Shuttle and highlighting the technological advances made by the space program. In addition, she was to film lessons about gravity, magnetism and hydroponics.

19. The flight was originally scheduled to lift off on Jan. 22, 1986. For good luck, she took a stuffed frog named “Fleegle,” which belonged to her 9-year-old son.

20. On Jan. 22, Florida was experiencing unusually cold temperatures. Meanwhile, the emergency landing facility in Senegal was hit with dust storms. The launch was delayed for several days before finally being given the go-ahead on Tuesday, Jan. 28, 1986.

21. Twenty minutes before liftoff, a Rockwell engineer watching on closed-circuit TV from California grew concerned about ice build-up and recommended the flight be delayed, but officials at the Kennedy Space Center saw nothing from the Shuttle’s 2,000 sensors and data points to indicate potential danger, and did not stop the countdown.

22. Seventy-three seconds after liftoff, at an altitude of 48,000 feet, the shuttle exploded. Later findings showed an O-ring seal on the right rocket booster was likely the culprit, its failure probably caused by cold temperatures.

24. President Reagan cancelled his previously scheduled State of the Union address, instead broadcasting a message of condolence to the shocked nation. Aware that a number of school children had watched the historic launch, he addressed them by saying, “I know it is hard to understand, but sometimes painful things like this happen. It’s all part of the process of exploration and discovery. It’s all part of taking a chance and expanding man’s horizons. The future doesn’t belong to the fainthearted; it belongs to the brave. The Challenger crew was pulling us into the future, and we’ll continue to follow them.”

25. McAuliffe was awarded the Congressional Space Medal of Honor. Today, there are many scholarships and grants established in her memory and at least 40 schools around the world named in her honor.