Coretta Scott King is remembered as the wife of Dr. Martin Luther King Jr., a role she cherished. But she was much more than just a wife and widow.

Coretta Scott King is remembered as the wife of Dr. Martin Luther King Jr., a role she cherished. But she was much more than just a wife and widow. In her honor, we present 20 facts you may not have known about the first lady of the civil rights movement.

1. Born April 27, 1927 in Marion, Alabama, young Coretta Scott grew up on a farm and picked cotton to help make money for her family.

2. As a child, she experienced the segregation and racism that were the standard at the time. Her family’s lumber mill was burned down by white neighbors. Coretta and her sisters had to be bussed miles from their home to attend the closest black high school.

3. Though her parents were uneducated, they were determined to send all three of their children to college. Sister Edythe was one of the first black students to attend Antioch College in Yellow Springs, Ohio, and Coretta joined her there a few years later.

4. She was a gifted musician and loved singing from a young age. She transferred from Antioch to the New England Conservatory of Music on scholarship, studying voice and violin.

5. A friend introduced her to Martin Luther King Jr. while she was studying at the Conservatory. “She said she wanted me to meet a very promising young minister from Atlanta,” she reflected with a laugh. “I wasn’t interested in meeting a young minister at that time.”

6. Coretta Scott might have been reluctant, but that young minister knew he’d found his true love. On their first date, he told her, “You know, you have everything I ever wanted in a woman. We ought to get married someday.”

7. The Kings were married on June 18, 1953, at her parents’ house. The ceremony was performed by Martin Luther King Sr. 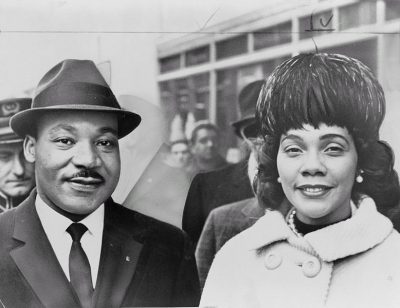 8. Throughout the marriage, the Kings clashed about Coretta’s role. She was thoroughly committed to the Civil Rights Movement and wanted to take a public leadership role, but Martin wanted her to focus on raising their four children.

9. Despite her husband’s wishes, Coretta Scott King stood by his side in the struggle for civil rights. While she raised their children, she also made speeches, gave Freedom Concerts to benefit the movement, and worked to get the Civil Rights Act of 1964 passed.

10. After Martin Luther King Jr.’s assassination in 1968, she asked performer Josephine Baker to take the helm of the Civil Rights Movement, but Baker declined. Coretta Scott King then stepped into the role herself.

11. She campaigned hard for her husband’s birthday to be made a national holiday. After 14 years of lobbying, she finally succeeded when President Reagan signed the 1983 bill establishing Dr. Martin Luther King, Jr. Day as a federal holiday. 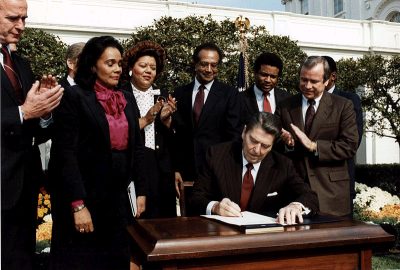 12. It wasn’t until 2000 that all 50 states observed the holiday, with South Carolina last to put it on the books.

13. Coretta Scott King had a passion for social justice that went beyond the U.S. Civil Rights Movement. She was also deeply troubled by apartheid in South Africa. She raised awareness and inspired demonstrations in the U.S. against South Africa’s racial policies, and she urged President Reagan to impose economic sanctions against South Africa.

14. She considered gay rights crucial to an equal nation. Citing her late husband’s words, “Injustice anywhere is a threat to justice everywhere,” she maintained that there must be a commitment in the Civil Rights Movement to work toward gay rights.

15. A founder of The Committee for a Sane Nuclear Policy, she was devoted to pacifism and world peace. She strongly opposed the 2003 invasion of Iraq. 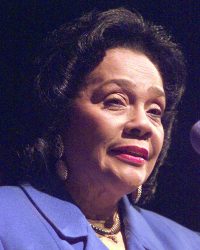 17. Visitors to Northern Israel can see the Coretta Scott King forest, established in her honor by the Jewish National Fund in 2006

19. By the mid-2000s, King was experiencing severe health problems: a stroke in 2005, a heart condition and ovarian cancer. At the time of her death from complications related to cancer, she was undergoing holistic therapy at a clinic in Mexico.

20. Coretta Scott King’s legacy remains strong. Honors given to her after her death include governmental resolutions for a moment of silence, the dedication of Super Bowl XL in her memory (and that of Rosa Parks), tributes from civil rights organizations… even a song by soul artist Teena Marie.