President Abraham Lincoln led the United States through the Civil War. We remember Lincoln’s life today as well as the lives of other notable people who died this day in history.

President Abraham Lincoln led the United States through the Civil War. His leadership during this difficult period in American history preserved the Union, abolished slavery and modernized the economy. We remember Lincoln’s life today as well as the lives of other notable people who died this day in history.

Click to discover notable people who were born this day in history including TV sitcom star Elizabeth Montgomery.

2013: Scott Miller, U.S. singer-songwriter and guitarist known for his critically acclaimed bands Game Theory and the Loud Family, dies at 53.

As Admiral Motti in 1977’s “Star Wars,” LeParmentier’s character mocks Vader’s “sad devotion to that ancient Jedi religion.” Vader responds with a demonstration, using the force to choke the young commander, but allowing him to live. LeParmentier appeared frequently in British television roles throughout his career and was working as a screenwriter when he died. Read more

2012: Dwayne Schintzius, U.S. professional basketball player who played center in the NBA for eight seasons, dies of leukemia at 43.

The 7-foot-2-inch center played for the University of Florida Gators from 1987 to 1990, helping Florida to its first three NCAA tournament appearances. He is Florida’s sixth-highest scorer with 1,624 points. Schintzius was drafted 24th overall in the first round by the San Antonio Spurs in 1990. He also played for the Kings, Nets, Pacers, Clippers, and Celtics during an eight-year professional career. Read more

2012: Rich Saul, U.S. NFL lineman who played 11 seasons for the Los Angeles Rams and was selected to six Pro Bowls, dies at 64.

2012: Murray Rose, Australian swimmer who won six Olympic medals and then became an actor, appearing on TV shows such as “Dr. Kildare” and “The Patty Duke Show,” dies at 73.

2010: Michael Pataki, U.S. character actor who was probably known best for his role as Count Malachi in an episode of “Happy Days” and who also appeared on “Bonanza” and “Star Trek” and in many movies, dies at 72.

2003: Erin Fleming, Canadian actress who appeared in a few movies including a Woody Allen film and is known best as the controversial live-in companion of Groucho Marx at the end of his life, dies by suicide at 61.

2002: Byron White, U.S. athlete and judge who was a three-time All-Pro selection as a running back in the NFL and then became a U.S. Supreme Court justice, dies at 84.

2001: Joey Ramone, U.S. musician and singer-songwriter known best as the lead singer of the legendary punk band the Ramones, dies of lymphoma at 49.

He switched to vocals and, despite a lack of formal voice training, became arguably one of the most recognizable singers of the 20th century, with a vocal style that influenced countless punk rock bands to follow. Responsible for most of the Ramones’ lyrics, he sometimes betrayed a leftist-leaning political outlook that put him at odds with guitarist Johnny Ramone. Read more

2000: Edward Gorey, U.S. author known best for his illustrated books including “The Doubtful Guest,” dies at 75.

“Somebody once said that it doesn’t much matter whether you’re conquering an empire or playing dominos,” Gorey told an interviewer shortly before his death. “It’s just another way of passing time.” If you’re thinking of using the quote to justify your own indolence, consider: Edward Gorey passed his time by writing and illustrating more than 100 books. Read more

1990: Greta Garbo, Swedish-born film actress who was an international star during the silent and golden eras in Hollywood, whose movies included “Anna Karenina,” dies at 84.

1980: Jean-Paul Sarte, French philosopher and writer who was one of the key figures in the philosophy of existentialism, dies at 74.

1980: Raymond Bailey, U.S. actor known best for his role as Mr. Drysdale on the sitcom “The Beverly Hillbillies,” dies at 75.

1912: The Titanic sinks in the North Atlantic Ocean on its maiden voyage after hitting an iceberg, killing more than 1,500 people. 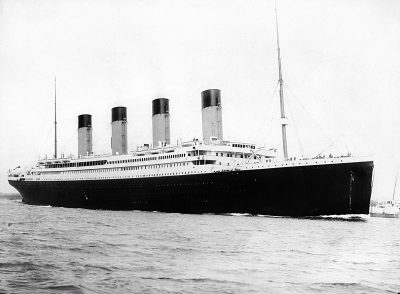 As the centennial of the Titanic disaster approached, one of the biggest news stories wasn’t the actual anniversary; nor was it the rerelease of James Cameron’s blockbuster movie in 3D. It was a story that made people shake their heads and sigh: the news that some young people were unaware that the sinking of the Titanic was real, not just a film. Read more

1865: Abraham Lincoln, U.S. president of the United States, is assassinated by John Wilkes Booth at 56. 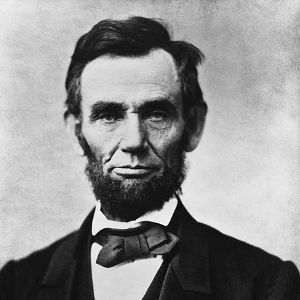 While subsequent presidents have all enjoyed significant assistance from speechwriters in crafting their messages, President Lincoln took a more hands-on approach and is one of the few presidents in U.S. history to have written the entirety of his speeches and remarks. Read more

Click to discover notable people who were born this day in history including TV sitcom star Elizabeth Montgomery.