Vicki Sue Robinson will always have a place in the hearts of dance music fans, thanks to her irresistible single “Turn the Beat Around.” We remember Robinson’s life today as well as the lives of other notable people who died this day in history.

Vicki Sue Robinson will always have a place in the hearts of dance music fans, thanks to her irresistible single “Turn the Beat Around.” Before she entered the disco scene, Robinson was an accomplished Broadway actress, making her debut at age 16 in “Hair.” She would go on to appear in “Soon” alongside Broadway legend Nell Carter and future Hollywood star Richard Gere, and later in “Jesus Christ Superstar.” She also appeared in several films, the last of which, “Red Lipstick,” opened just 11 days before her death in 2000. We remember Robinson’s life today as well as the lives of other notable people who died this day in history.

Click to discover notable people who were born this day in history including activist Coretta Scott King.

The child actress was featured in commercials and on “The Partridge Family,” which ran on ABC from September 1970 to March 1974. The show revolved around a widowed mother and her five children who formed a band. The series starred Shirley Jones, with her real-life stepson David Cassidy as the resident heartthrob. Read more

Skowron became a star first baseman with the Yankees and went on to appear in eight All-Star games over six seasons. Baseball Commissioner Bud Selig called him “an integral part of the wonderful Yankee teams of Mickey Mantle and Roger Maris. He was a wonderful storyteller and an important link to a great era in baseball history.” Read more

Besides her 1969 Broadway hit “Promises, Promises,” Mercer won praise for the 1978 revival of “Stop the World, I Want To Get Off” co-starring Sammy Davis Jr. On television, she starred on the ABC-TV comedy “It’s a Living” from 1980 to 1982. She also had roles on “St. Elsewhere,” “Mary Hartman, Mary Hartman,” and “Love, American Style.” Read more

2002: Ruth Handler, U.S. businesswoman who was the president of Mattel and creator of the Barbie doll, dies at 85. 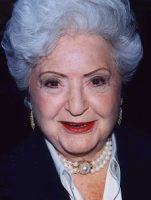 Though it seems hard to believe now given the ubiquity of Barbie and similar dolls, before the 1950s nearly all dolls marketed to girls were cherub-faced and designed with infant or toddler proportions. Handler, watching her own daughter play, noticed that she liked to pretend her dolls were actually adults. Read more

2000: Vicki Sue Robinson, U.S. singer and actress who was on Broadway in “Hair” and had a disco hit with “Turn the Beat Around,” dies at 45.

1999: Al Hirt, U.S. trumpeter and bandleader who was remembered best for his hit song “Java” and for the theme song to “The Green Hornet,” dies at 76.

1970: Arthur Shields, Irish actor who appeared in several John Ford movies, including “The Quiet Man” opposite John Wayne, dies at 74.

1965: Edward R. Murrow, U.S. broadcast journalist known for his radio news reporting during World War II and for producing news reports that led to the censure of U.S. Sen. Joseph McCarthy, dies at 57.

1932: Hart Crane, U.S. poet who is considered one of the most influential poets of his generation and is known best for his work “The Bridge,” dies by suicide at 32.

1882: Ralph Waldo Emerson, U.S. essayist and poet who was known as a pioneer of individualism, dies at 78.

1521: Ferdinand Magellan, Portuguese explorer who set out on an expedition to circumnavigate Earth and prove it is round, is killed in the Philippines during the trip at either 40 or 41. Others in his crew finished the journey, proving the planet is indeed round.

Click to discover notable people who were born this day in history including activist Coretta Scott King.