Rudolph Valentino, also known as the Latin Lover, was one of Hollywood’s earliest sex symbols. We remember Valentino’s life today as well as the lives of other notable people who died this day in history.

Rudolph Valentino, also known as the “Latin Lover,” was one of Hollywood’s earliest sex symbols. Starring in epics in the silent era like “The Horsemen of the Apocalypse,” “Blood and Sand,” and “The Eagle,” he won over legions of devoted female fans with good looks and smoldering charisma. His life was cut short at 31 because of complications of appendicitis and gastric ulcers. News of his death led to reported suicides among his fans and a riot as 100,000 people lined the streets of New York for his funeral. We remember Valentino’s life today as well as the lives of other notable people who died this day in history.

Click to discover notable people who were born this day in history including basketball legend Kobe Bryant.

2016: Steven Hill, U.S. actor known best for his portrayal of District Attorney Adam Schiff for the first 10 seasons of “Law & Order,” dies at 94.

2012: Steve Van Buren, U.S. Pro Football Hall of Fame running back for the Philadelphia Eagles who rushed for almost 6,000 yards in his career and led the Eagles to two NFL championships, dies of pneumonia at 91.

The former LSU star, nicknamed “Wham-Bam” for his quick and punishing running style, joined the Eagles in 1944 as a first-round pick, according to his obituary by The Associated Press. He led the NFL in rushing four times and finished his eight-year career with 5,860 yards rushing and 77 touchdowns. The five-time All-Pro player was selected to the NFL’s 75th Anniversary Team in 1994, and was the first Eagles player elected to the Pro Football Hall of Fame. Read more

2012: Jerry Nelson, U.S. puppeteer known best for his work with the Muppets, whose longest-running character was Count von Count, dies of pneumonia at 78. 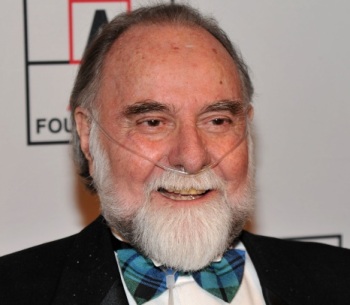 For more than 40 years, Nelson worked with Jim Henson‘s Muppets (like many a young puppeteer, Nelson had sought out Henson and the wonderful opportunities his workshop offered). Nelson joined “Sesame Street” in its second season and went on to perform characters for “The Muppet Show,” “Fraggle Rock,” “The Great Muppet Caper,” and more. His great singing voice brought life to his musical characters, according to his obituary by The Associated Press, and even his strictly spoken-word characters had unique and memorable voices. Read more

2012: James Fogle, U.S. author known best for his autobiographical novel “Drugstore Cowboy,” which was adapted into a movie starring Matt Dillon, dies while in prison at 75.

2007: Robert Symonds, U.S. actor who had a recurring role on “Dynasty” and guest-starred on such television series as “M*A*S*H” and “Cheers,” dies of complications of prostate cancer at 80.

2006: Maynard Ferguson, Canadian jazz trumpeter who had a hit song with the instrumental version of the theme song for the movie “Rocky,” “Gonna Fly Now,” dies at 78.

Ferguson, also a much admired teacher, became identified with ear-piercing power and dizzying high notes that he was still able to play with precision, according to his obituary by The Associated Press. He was named Down Beat magazine’s “trumpeter of the year” three times. “My instrument is a thing of pleasure, and I play it only because I enjoy it,” he once said. “The most important thing is doing what feels right for me.” The trumpeter credited yoga with enabling him to harness the full capacity of his lungs and routinely hit a double-high-C. Read more

2005: Brock Peters, U.S. actor known best for playing the role of Tom Robinson in “To Kill a Mockingbird,” who also portrayed Fleet Admiral Cartwright in two “Star Trek“ movies, dies of complications of pancreatic cancer at 78.

In “Carmen Jones,” Peters worked with Dorothy Dandridge and Harry Belafonte. Otto Preminger’s production of “Porgy” starred Sidney Poitier and Dandridge, and featured Sammy Davis Jr., Pearl Bailey, and Diahann Carroll as well as Peters. Among Peters’ other films were “Soylent Green,” “The L-Shaped Room,” and “The Pawnbroker.” His accolades include a National Film Society Award, a Life Achievement Award from the Screen Actors Guild, and a Tony Award nomination for his performance on Broadway in “Lost in the Stars.” Read more

2003: Bobby Bonds, U.S. Major League Baseball outfielder who was the second player to hit more than 300 home runs and steal more than 300 bases after Willie Mays and was the father of baseball player Barry Bonds, dies at 57 after being treated for a brain tumor and lung cancer.

Bobby Bonds, a three-time All-Star and the MVP of the 1973 game, hit 332 home runs and stole 461 bases for the Giants, New York Yankees, California Angels, Chicago White Sox, Texas, Cleveland, St. Louis, and the Cubs. He began his career with a bang, hitting a grand slam in his first game June 25, 1968. He’s the only player in the modern era to accomplish that feat. Bonds hit his last home run Sept. 24, 1981, for the Chicago Cubs – he connected against Jesse Orosco, still playing for the New York Yankees. Read more

2002: Hoyt Wilhelm, U.S. Major League Baseball Hall of Fame relief pitcher who was known for his knuckleball and was the first pitcher to record more than 200 saves in his career, dies of heart failure at 80.

2001: Kathleen Freeman, U.S. character actress known for her comic roles, appearing in 11 Jerry Lewis films and on the TV series “The Donna Reed Show” and “Hogan’s Heroes,” dies of lung cancer at 82.

1999: Norman Wexler, U.S. screenwriter who wrote the movie “Saturday Night Fever” and co-wrote the movie “Serpico,” who suffered from severe bipolar disorder and was arrested in 1972 for threatening to kill President Richard Nixon, dies at 73.

1990: David Rose, U.S. songwriter, composer, and pianist whose most famous song is “The Stripper” and who wrote music for many television series, including “Bonanza” and “Little House on the Prairie,” and was married at one time to Judy Garland, dies at 80.

1975: Hank Patterson, U.S. actor known best for his regular role as the farmer Fred Ziffel on the sitcoms “Green Acres” and “Petticoat Junction,” dies at 86.

1966: Francis X. Bushman, U.S. film actor who was a star during the silent era and was the first to be called the King of the Movies, a nickname given later to Clark Gable, dies at 83.

1960: Oscar Hammerstein II, U.S. librettist and theatrical producer who teamed with Jerome Kern on the play “Show Boat” and with Richard Rodgers on “Oklahoma!” – and whose many songs included “Oklahoma” and “Getting To Know You” – dies at 65.

1926: Rudolph Valentino, Italian film actor who was a sex symbol during the silent era and starred in popular movies such as “The Sheik,” dies of peritonitis at 31.