Johnny Cash was the Man in Black, one of the greatest and most influential country musicians of all time. We remember Cash’s life today as well as the lives of other notable people who died this day in history.

Johnny Cash was the Man in Black, one of the greatest and most influential country musicians of all time. His fame spanned half a century, from early singles “Cry! Cry! Cry!” and “I Walk the Line” in the 1950s to his haunting covers of popular singles like “Hurt” and “Ain’t No Grave” in the 2000s. In between, he weathered career ups and downs, acted on screens big and small, spoke out as a Native American activist, became half of a country music power couple when he married June Carter, and continued to fascinate his fans all the while. He was a member of the Country Music, Gospel Music and Rock and Roll halls of fame; won multiple Grammy and Country Music Association awards; and received the Kennedy Center Honors and the National Medal of Arts. We remember Cash’s life today as well as the lives of other notable people who died this day in history.

Click to discover notable people who were born this day in history including movie star Paul Walker.

2014: Ian Paisley, Irish politician and religious leader who was a major figure of Ireland’s Troubles, dies at 88.

Paisley was Northern Ireland’s most polarizing politician throughout its three decades of civil strife, during which the evangelist’s blistering oratory was often blamed for fueling the bloodshed that claimed 3,700 lives. Yet at the zenith of his peace-wrecking powers, Paisley in 2007 stunned the world by delivering the province’s first stable unity government between its British Protestants and its Irish Catholics. “Dr. No,” as he was widely known, finally said yes – and his powerful U-turn cemented a peace process that he had done so much to frustrate. Read more

2013: Frank Tripucka, U.S. pro football quarterback who was the first quarterback for the Denver Broncos and the first American Football League quarterback to pass for more than 3,000 yards in a season, dies of congestive heart failure at 85.

A former standout at Notre Dame, Tripucka played for the Detroit Lions, Chicago Cardinals, and Dallas Texans. He was brought in as a coach before the 1960 season, but it became obvious he was Denver’s best option at QB, according to his obituary by The Associated Press. Tripucka threw for 3,038 yards and 24 touchdowns that season. He’s also credited with tossing the first touchdown pass in AFL history, a 59-yard connection to Al Carmichael. Read more

2013: Ray Dolby, U.S. engineer who invented the Dolby NR system to reduce unwanted noise for better sound quality, dies after being diagnosed with acute leukemia at 80.

Dolby held 50 U.S. patents and won a number of notable awards for his life’s work, including several Emmys, two Oscars and a Grammy. He was awarded the National Medal of Technology from then-President Bill Clinton and was inducted into the National Inventors Hall of Fame in the U.S. and the Royal Academy of Engineers in the U.K., among many more honors. In 2012, the theater that serves as home to the Academy Awards was renamed the Dolby Theatre, and the Ray Dolby Ballroom was named in his honor. Read more

2009: Jack Kramer, U.S. professional tennis player who was the World No. 1 player for many years and won three grand slam titles, dies of cancer at 88. 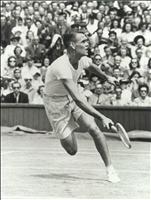 Kramer won the Wimbledon singles title in 1947 and U.S. Open championships in ’46 and ’47. He won seven other Grand Slam titles, and led the United States to Davis Cup titles in 1946 and ’47. He then became the undefeated worlds professional champion, 1948 to 1954. Read more

Wallace’s first novel, “The Broom of the System,” gained national attention in 1987 for its ambition and offbeat humor. The New York Times said the 24-year-old author “attempts to give us a portrait, through a combination of Joycean word games, literary parody and zany picaresque adventure, of a contemporary America run amok.” Published in 1996, “Infinite Jest” cemented Wallace’s reputation as a major American literary figure. The 1,000-plus-page tome, praised for its complexity and dark wit, topped many best-of lists. Time magazine named “Infinite Jest” in its issue of the 100 Best English-language Novels from 1923 to 2005. Read more

2004: Kenny Buttrey, U.S. drummer who was one of the most prolific session drummers and worked with Bob Dylan, Neil Young, Elvis Presley, and George Harrison, among others, dies at 59.

2003: Johnny Cash, U.S. singer-songwriter and guitarist who was one of the most influential musicians of the 20th century, whose hit songs included “Ring of Fire” and “I Walk the Line,” dies of complications of diabetes at 71.

One of Cash’s earliest all-star recordings was captured at the very beginning of his fame. In 1956, when Cash had released a few singles but no studio albums, he got to be part of a spontaneous jam session with three other legends: Elvis Presley, Carl Perkins, and Jerry Lee Lewis. One day when they were all at the Sun recording studios at the same time, the quartet played and sang a few dozen songs, mostly country and gospel music, and a quick-thinking recording engineer left the tapes running to capture the whole session. The result was a joyful meeting of minds and talents. Read more

2001: Victor Wong, U.S. character actor who appeared in such movies as “Big Trouble in Little China” and “Tremors” and was friends with Jack Kerouac, who wrote about their friendship in his novel “Big Sur,” dies at 74.

2000: Stanley Turrentine, U.S. jazz saxophonist who worked with Max Roach, Freddie Hubbard, and George Benson, dies of a stroke at 66.

1994: Tom Ewell, U.S. character actor known best for his role as Richard Sherman in “The Seven Year Itch” starring Marilyn Monroe, dies after a series of illnesses at 85.

1993: Raymond Burr, Canadian actor well-known for playing the title roles on the TV series “Perry Mason” and “Ironside,” dies of kidney cancer at 76.

1993: Charles Lamont, U.S. director who directed many of the popular Abbott and Costello movies, dies at 98.

Reviewers called Perkins’ performance the best of his career, though he wasn’t even nominated for an Oscar (he did win best actor from the International Board of Motion Picture Reviewers). In some ways, his performance was perhaps too good – he so masterfully played a mentally ill killer that he became typecast. Although perhaps equally adept at other types, he continued to play the murderers, the mentally disturbed … and Norman Bates, in several “Psycho” sequels. Once he was asked if he could do it over again, would he still accept the role of Norman Bates, knowing he would be typecast in the future. Perkins responded with a confident “yes.” Read more

1986: Frank Nelson, U.S. character actor who appeared many times on “The Jack Benny Program” and guest-starred on many other shows including “I Love Lucy,” and was known for his catchphrase “EEE-Yeeeeeeeeesssss?”, dies of cancer at 75.

1980: Lillian Randolph, U.S. actress who played Annie in the movie “It’s a Wonderful Life” and starred on the “Amos ‘n’ Andy” radio show, dies of cancer at 81.

1978: Frank Ferguson, U.S. character actor who starred as ranch handyman Gus on the television series “My Friend Flicka,” dies at 71.

1977: Steve Biko, South African anti-apartheid activist whose beating death while in custody in prison made him a hero in the fight against apartheid, dies at 30.

Click to discover notable people who were born this day in history including movie star Paul Walker.