Dr. Spock has been at the forefront of child care since he first made a splash seven decades ago.

Dr. Benjamin Spock has been at the forefront of child care since he first made a splash seven decades ago. His advice has been religiously followed by some, dismissed as kooky by others; controversy has swirled around his ideas for decades. But despite the controversy, today – years after his death March 15, 1998 – new parents still follow his advice. They just might not realize they do.

When Dr. Spock’s book Baby and Child Care was published in 1946, its simple core message was revolutionary: “Don’t be afraid to trust your own common sense.” Between that and his insistence that parents should show love and affection to their children rather than constant strict discipline, Dr. Spock challenged the conventional wisdom of early 20th-century childrearing like no one else. 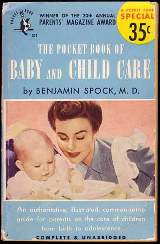 Today, the basic tenets of Dr. Spock’s child care philosophy might seem obvious to most parents. Hug your child. Tell her she’s special and loved and unique. Feed him when he’s hungry. Discipline with words, not corporal punishment. But in 1946, this was new. Parents had long been encouraged not to shower their children with affection as this would make them weak and unprepared for the world. Feeding and naps were to be done on a strict schedule, regardless of the baby’s immediate needs. And a child who just got a mild spanking for an offense got off easy – physical punishment was the norm. Spock changed all that with his encouragement for parents to follow their instincts, be attentive to the baby’s needs, and be generous with affection.

While much of Dr. Spock’s advice is still followed today, some has been replaced and even discredited. A notable example is his 1958 call to put babies to sleep on their stomachs. His reasoning was that if a baby were to vomit, he would be more likely to choke on the vomit if placed on his back. It’s a legitimate concern, but an even bigger danger than choking is SIDS (Sudden Infant Death Syndrome). Later research showed that stomach-sleeping is one of the major causes of SIDS, and these deaths are greatly reduced when infants sleep on their backs. The stomach-sleeping philosophy was a part of Dr. Spock’s advice for some years after studies began to render it suspect. While later editions of Baby and Child Care no longer advocate stomach-sleeping, the bad advice took its toll on Spock’s reputation as an infallible expert.

In other areas, Dr. Spock was more responsive to changing trends and quicker to adjust his advice. In his earliest editions, he supported circumcision of male babies, which was common and rarely questioned. By the 1980s, he had reversed his position and no longer advocated circumcision, stating, “Circumcision of males is traumatic, painful, and of questionable value.” Today, while circumcision is still commonly practiced, more and more parents are beginning to question it and opt out. 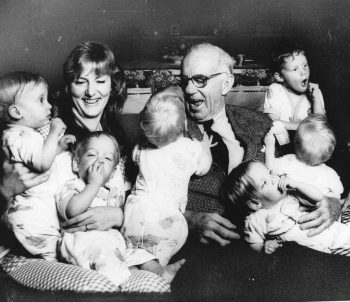 Dr. Spock visits Karen Anderson, the mother of quintuplets with their sibling, in October 1974. (AP Photo)

But it wasn’t these reversals in position that caused the greatest controversy for Dr. Spock. It was his advice on treating children with love and affection that made a generation of conservative parents question what he taught.

When the Vietnam War broke out, Dr. Spock was vocally against it. His opposition put him in the camp of legions of young people who protested the war – young people who were often perceived as living dangerously free-and-easy lives. Conservative minister and author Norman Vincent Peale decided that Dr. Spock’s advice – hug your children, feed them when they are hungry, put them to sleep when their tired – was the root of that problem. He alleged that “the U.S. was paying the price of two generations that followed the Dr. Spock baby plan of instant gratification of needs.”

Dr. Spock countered this with a defense of his methodology – there was, he said, no instant gratification advocated in his books. He had called for parents to express their love for their children while providing “clear, firm discipline,” not instead of providing it. And he suspected that he was being punished for his liberal politics more than his childrearing philosophy. But to an extent, the damage had been done. He now had a reputation as the overly-permissive childrearing expert. Many parents were no longer interested in following any of his advice, seeing him as the corruptor of a generation.

Dr. Spock bounced back somewhat in the decades that followed the war, although his advice continued to generate controversy – just months before his death, he surprised parents and experts by advocating a vegan diet for children after age two. It’s an idea that may catch on some day, but for the moment, the majority still sees it as one of his more radical ideas. 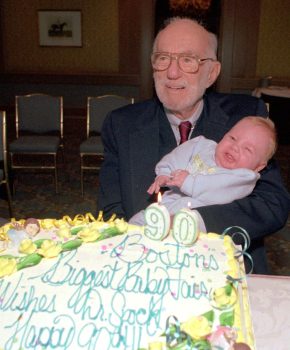 Though Dr. Spock’s books are no longer the massive sensation they were in the 1940s and ’50s, they influenced generations of parents – and the childcare experts of today and tomorrow. And even if a new parent in 2011 doesn’t read his Baby and Child Care, it’s likely that they’re still influenced by his advice. Any parents who hug and kiss their children, showing their love and encouraging their children to express their individuality, have Dr. Spock to thank.