Twenty-five years after Freddie Mercury’s death, he’s more Google-able than ever. We reflect on the legacy of one of rock’s all-time greatest singers.

Google “Freddie Mercury” and you’ll get literally tens of millions of results. Kids excited about playing Queen songs on video game Rock Band. More tribute Web pages than you could possibly sift through in a sitting. Google’s own Google Doodle for Mercury, presented on his 65th birthday, 5 September 2011. And, my strange favorite, a motivational poster displaying a photo of Mercury getting an on-stage piggyback ride from Darth Vader with the caption, “Freddie Mercury is riding Darth Vader. Your argument is invalid.” 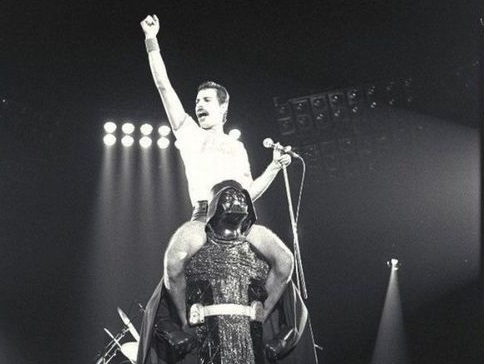 Something tells me the fan who came up with that one wasn’t even alive when Mercury died 25 years ago, 24 November 1991. But it doesn’t matter. Mercury’s popularity just grows and grows, even all these years later, and you don’t have to have seen Queen live to know that Mercury was a force of nature… capable, apparently, of harnessing the dark lord himself.

As a singer, he was bombastic, with a four-octave range that swept from a low growl to soaring heights. As a songwriter, he was boundlessly creative, trying a little something new every time and offering intricate arrangements. And as a performer, he was darn-near godlike, packing stadiums and delighting audiences with his theatrical antics and fantastic music. 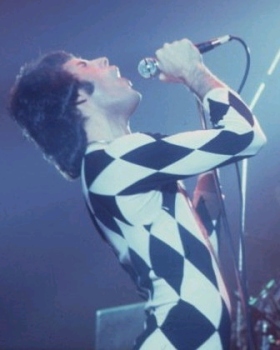 But enough talk. You’re here for the rock, right? Here’s Queen playing “Radio Gaga” to a jam-packed and adoring Wembley Stadium in 1986.

Mercury displays his splendid piano skills (and more theatrics) in “Somebody to Love.”

And, of course, there’s the perennial favorite… one that combines everything that made Mercury great. We hear his soaring voice and his piano work, his complexity as a composer is obvious, and his penchant for the dramatic is at the forefront of the official video. It’s “Bohemian Rhapsody.”