Helen Keller: Beyond the Miracle

Helen Keller overcame many obstacles to change common perceptions of what a disabled person could achieve.

Though blind and deaf from infancy, Helen Keller overcame many obstacles to change common perceptions of what a disabled person could achieve. An international celebrity and symbol of purity during the Victorian Era, she remains one of America’s most inspiring women 44 years after her death June 1, 1968.

This is due in large part to the success of The Miracle Worker, performed first on television in 1957 and then as a Broadway play and movie. But as the story only covers the early years of Keller’s life, its popularity has to an extent created the myth of Keller as a saintly beacon of hope. The myth obscures both her legacy as a socio-political activist and her life as a human being with human flaws.

While The Miracle Worker made Keller’s early life well-known, it was as an adult that she made her greatest contributions. Working on behalf of the blind, Keller made nine globe-circling tours, traveling across five continents and 35 countries during her life. On her 1937 tour of Japan she gave 97 lectures in 39 cities. Many schools for the blind and deaf were established worldwide as a result of her work.

One organization that she worked with was the American Foundation for the Overseas Blind, which changed its name in 1977 to Helen Keller International (HKI). HKI is devoted to blindness treatment and prevention through nutrition and medical care, and still operates in the United States and 22 countries in Asia and Africa.

Largely forgotten today is the fact that, in addition to her work for the disabled, Keller supported causes controversial in her time. A member of the Industrial Workers of the World (IWW), she championed women’s suffrage, child labor laws and birth control. She was one of the seven founding members of the American Civil Liberties Union and was such a notorious socialist that her books were burned by the Nazis.

Worried about alienating conservative philanthropists, the American Foundation for the Blind leaned heavily on Keller to give up writing and speaking publicly about her political beliefs. Though she never renounced her support of socialism, she eventually became less active in the movement. The FBI continued to monitor Keller’s activities, but her disabilities protected her from public denunciation during the McCarthy era. 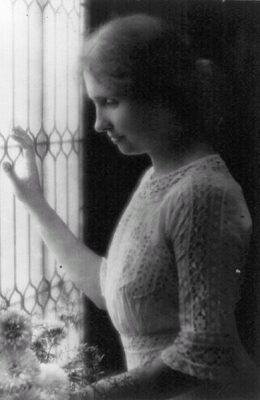 Ironically, although Keller identified herself with the working class, she was supported financially throughout her life by wealthy benefactors. Her college education was funded largely by Standard Oil magnate Henry Huddleston Rogers, and industrialist Andrew Carnegie bestowed a pension on Helen in 1914, two years after she published a letter in the New York Call entitled “How I Became a Socialist.” Despite earning income from speaking engagements, publications and even vaudeville performances, she remained dependent on trust funds her entire life.

For many, her idealized public persona proves a difficult one to live up to, and it may come as a surprise to learn that even Helen Keller wasn’t as saintly as Helen Keller. That she could be thoughtless toward her friends, distant toward her family, and held fierce, decades-long grudges were never public knowledge in an age less preoccupied with celebrity foibles than our own.

She is best remembered not as the personification of hope or some other lofty notion, but as a real person who, through lifelong dedication, changed the world in real, tangible ways. Keller proved that deafblind people did not have to be warehoused in asylums, that they could be educated and go on to lead fulfilling lives. Her enduring message is not one of miracles, but of the everyday struggle against adversity. “Although the world is full of suffering,” she said, “it is full also of the overcoming of it.”