My brother killed himself more than a dozen years ago. A decade later, I finally asked for help.

I was thinking of John as I drove to work that morning. Of us three brothers, he seemed to be having the hardest time. After years of working the night shift, he’d been laid off when his employer moved production south. He struggled to find another job and when he did find one, it seemed like he was struggling to adapt to a new line of work. But in other ways he was doing well: his wife was great, and he always referred to his son and daughter as “my finest work.” But it just seemed like he was struggling. Poor John.

Are you grieving the loss of a loved one from suicide? Find comfort in our grief support group.

I don’t know why I was thinking of him that morning. We lived a few hours apart, saw each other once every month or two. I was consumed by my job at a startup most of the time.

I parked the car and walked to the office. Sat down and began answering emails, activity all around me. Someone stopped by my desk to ask about an urgent issue. As we talked it through, my phone rang. “Hi, this is Chuck.”

“Chuck, you’ve got to come home.” It was my oldest brother, Sam. He never called me at work. “Something happened to John.”

“What? Is he okay? What happened?”

“Chuck.” He paused, pained. I was making him say it. “He killed himself. He died.” The office swirled away from me. “We’re all at his house. Get here as soon as you can.” 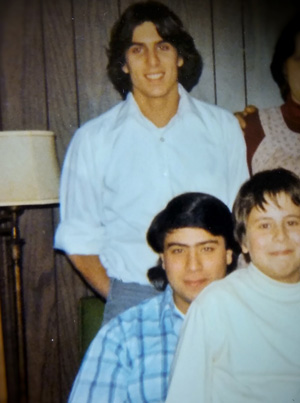 How I got through those hundred and fifty miles, I don’t remember. Someone gave me a ride – I know I didn’t drive myself – but the details are mixed up in my memory with those of my mother’s death a few years before. The next thing I remember is walking through the door into all that raw grief. Living the farthest away, I was the last there. Everyone already knew what happened and I just heard scraps of conversation. “In the garage.” “… from when I had a wisdom tooth out a while ago, we should have thrown away the extra Vicodin.” “The ladder.” “Half a bottle of tequila.” I tried to piece it together on my own because I didn’t want to ask anyone directly: how exactly did he kill himself?

Some people handle grief calmly, they get inside themselves. That’s what I do. Others careen around and crash into each other. In that house some of us handled it poorly; our anger, ultimately at John, came out misdirected at each other.

We all cried a lot. I wanted to do something for those poor kids of his, one of them in middle school, the other too young to understand what was really going on. That’s how I handled it poorly: I stayed inside myself when I should have walked across the room and just held those kids. But they had a lot of other people doing that for them.

I talked to an ex-girlfriend late that night. She said, “Maybe it was an accident. You know people do take Vicodin for the buzz sometimes, maybe he just took too much.”

“No,” I said. “No, he took a whole bottle of them. Half a bottle of tequila. It was on purpose.” But it stuck in my head. Maybe it was just an accident.

Weeks passed. Weird thoughts came into my head: how could he do this when the Cubs were having such a great season? Didn’t he at least want to find out if they ended up in the World Series? But then I’d think, you idiot, forget the Cubs. How could he do this just a month before his son’s birthday?

When Bartman knocked that foul ball away from Moisés Alou’s glove, I thought, well, at least John doesn’t have to see this.

I got in the habit of calling my dad every day after work. One day he said, “We got copies of the death certificate. I put one in the mail for you. Just thought you’d want to have one.” It arrived and I opened it and read that bare, clinical language, and I finally understood. The liquor and drugs didn’t kill him, he just took them to dull the pain. He locked the garage, put blankets over the windows, and hung himself. As I read it, I felt like some kind of life force was draining out of me, leaving me colder, but I read through to the end. I felt like I had to know exactly what he did.

I thought about calling that ex-girlfriend again and telling her, “See, I told you, it was on purpose.” I knew that was a bad idea, and I didn’t do it.

It seemed that his suicide had come out of nowhere, that he’d given us no sign, but as I thought back, I kept remembering times when John did show his hand. Once I told him about a camping trip I was planning. “Devil’s Lake in Wisconsin, there are hiking trails all over the bluffs that surround the lake. Supposed to be beautiful.”

“Oh yeah,” he said. “Every year a couple people jump off those bluffs. Be careful up there.” I just took it as concern.

As I went through the motions of my life after John’s suicide, inside my head I was thinking back over conversations I had with him, trying to analyze them for signs he’d given us.

Years before – I think I was in high school – I was standing in front of the house with him in the bitter cold of a January. The hood was up on his car, which wasn’t turning over. I watched as John sprayed starter fluid on the engine. He held up the can. “People get high huffing this stuff and they end up dying. Don’t ever do that.”

Was it a warning sign? Or just good advice to his dumb teenage brother?

I’d like to say John’s suicide was a wake-up call for me, and that I went right in to get help for my own depression. But I didn’t. I just tried to handle it myself like I had always done.

As months turned into years, we moved forward from John’s death. It wasn’t like getting over a cold; it was more like losing a limb. You don’t fully get well, but you learn how to get on with life even with something missing that will never come back. I got married, changed careers and then changed back. Had kids. Bought a house. There were lots of ups and some downs but regardless, that black ball of depression lurked inside. And it had changed after John died. When I was struggling the most with depression, the idea of suicide would appear before me. It had never done that before. I’d hold the idea in my hands like a strange artifact, turning it over, feeling its ridges, examining its curves, finally putting it away.

“I never think about actually killing myself,” I’d say to myself, “I just think about the idea of suicide.” It was a very fine distinction that I tried to convince myself was meaningful.

It got to the point where the phrase changed into “I never think about actually killing myself, but I wouldn’t be surprised if that’s how I end up dying.”

It was 10 years after John’s death that I finally asked for help. It turned out, to my surprise, that you do actually get help when you ask for it. I don’t feel that black ball lurking within me anymore. I never get that old artifact out of my pocket anymore, never turn it over in hands. To be blunt, I never consider killing myself anymore. I’m not “cured,” but I know what I need to do to keep treating the condition.

One day, years after John’s death, I had a dream that he and Sam and I were together, talking and laughing. Just laughing and laughing. About what I don’t know, but it felt good. John was always the funniest of the three of us. I woke up missing him but smiling.

My biggest regret in life is waiting decades to see a doctor about my depression. If you’re depressed, don’t try to handle it yourself. Tell your doctor, a friend, or call the National Suicide Prevention Lifeline, 1-800-273-TALK (8255).

Although everyone experiences bereavement and grief differently, that doesn’t mean that you have to do it alone.
Join one of our grief support groups.