Home > News & Advice > Culture & History > Narnia and Beyond: The Fiction of C.S. Lewis

Narnia and Beyond: The Fiction of C.S. Lewis

The recent big-screen debut of “The Chronicles of Narnia: The Voyage of the Dawn Treader” brings renewed attention to Narnia and the other creations of author C.S. Lewis. We offer a reading list for fans of the movies.

This weekend saw the opening of the movie The Chronicles of Narnia: The Voyage of the Dawn Treader – and with it, another chance for children and adults alike to enjoy the fantastic worlds created by author C. S. Lewis.

Clive Staples Lewis (1898-1963) was a prolific writer of scholarly works, fiction, poetry, memoirs, and more. Fans of the Narnia movies won’t be surprised to learn that much of his fiction tended toward fantasy and science fiction, often with Christian themes at its heart – but with strong influences from pagan traditions as well.

Lewis opposed the idea of turning his creations into movies, especially the Chronicles of Narnia. He worried that the talking animals he created – richly developed and dignified in the context of his books – would “turn into buffoonery or nightmare” onscreen. It was the 1950s when he expressed this fear, and a look at that decade’s special effects goes a long way toward explaining it. Maybe Lewis would look more fondly at the 21st century adaptations of his books, since technology now allows for less nightmarish creatures.

Even so, it’s likely that Lewis would rather we read his books than watch big-screen retellings. In that spirit, we present five C.S. Lewis works that fans of the Narnia movies might enjoy.

1. Boxen: Childhood Chronicles Before Narnia. As a boy, Lewis loved to read, and he was especially delighted by the anthropomorphic animals created by Beatrix Potter. This fascination, combined with a rich imagination even at a young age, led Lewis to create stories of a world called Animal-Land, inhabited by talking animals. He shared these stories with his older brother Warren, and in return, Warren told stories of India. The two influences came together and the brothers created the kingdom of Boxen. Over the course of several years, they fleshed out this magical land with rich details of its inhabitants, politics, geography, and history. Lewis wrote down these tales and even created an Encyclopedia Boxonia. The stories and encyclopedia have been collected into the Boxen volume, offering a glimpse at the author’s early feats of imagination.

2. The Space Trilogy: Out of the Silent Planet, Perelandra, and That Hideous Strength. Childhood Narnia fans, once grown up, just might love this science fiction series. Like the Chronicles of Narnia, the Space Trilogy offers a spectacular world of fantasy with a dose of Christian imagery. The protagonist of the series, Dr. Elwin Ransom, voyages first to Mars, where he meets both an alien race and a group of angels – or maybe extraterrestrials, or maybe gods – who rule the planets and the cosmos. He learns that Earth is the titular silent planet, cut off from the rest of the universe by its dark angelic ruler. In the second volume, Ransom travels to Venus, known as Perelandra to the rest of the cosmos. Here, the first man and first woman have recently been born to the planet, and Ransom must help them resist the compelling arguments of the planet’s first evil. In the final book, Ransom remains on Earth, where he works against a scientific institute bent on unleashing demons on the world. Despite the sci-fi elements of space travel and evil scientists, the trilogy is far from hard science fiction – it’s more like fantasy with some sci-fi touches.

3. The Screwtape Letters. This epistolary novel consists of letters written from one demon to another. Screwtape, the writer, serves as trainer and mentor to Wormwood, the recipient. Wormwood is learning his craft by tempting a human, known only as The Patient. Screwtape advises him in the best ways to take advantage of human weaknesses and lead The Patient down the path toward Hell. The Screwtape Letters movie adaptation is in development and completion is projected for any time between 2011 and 2013 – leaving plenty of time to read the book before seeing the movie.

4. Till We Have Faces. The Greek myth of Cupid and Psyche haunted Lewis from his adolescence, prompting him finally to create this reimagining of the story. Told from the point of view of Psyche’s older sister, the novel explores the myth’s themes of beauty, greed, betrayal and vision. A favorite among Lewis’ adult fans, it’s also reported to be the book he considered his best. 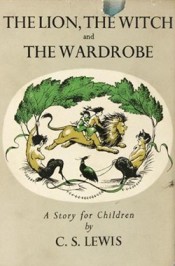 First edition cover of The Lion, The Witch and the Wardrobe

5. The Chronicles of Narnia: The Lion, the Witch and the Wardrobe; Price Caspian; The Voyage of the Dawn Treader; The Silver Chair; The Horse and His Boy; The Magician’s Nephew; and The Last Battle. This seven-volume series is Lewis’ best-known and most-beloved work, and we include it because fans of the movies who haven’t yet read the books are truly missing out. The series envisions the entire history of the fantastic land of Narnia – from its creation to its rule by an evil queen, on through its golden age and finally its apocalypse. All phases of Narnia’s existence are attended by human children from our world, who learn from the land and its inhabitants as much as they influence them. Narnia has been a favorite destination of children and adults alike for 60 years, and with good reason. These classics carry the reader to a world of beauty and adventure, where animals think and talk, where children are important and taken seriously, where you can fly on the back of a winged horse or discuss battle strategy with a lion or sail to the literal edge of the world.

With only three movies completed – and no guarantee the other four stories will grace the silver screen – those hungry for more Narnia can get the most immediate gratification by turning to the books. Once they’ve finished the Chronicles of Narnia, the fun doesn’t have to stop… there are dozens more C. S. Lewis books to choose from.