Nat King Cole died Feb. 15, 1965. On the anniversary of his death, here are 25 facts about the life and legacy of the legendary singer.

1. Born Nathaniel Adams Coles in Montgomery, Alabama, he moved with his family to Chicago at the age of four.

2. He was already learning to play the organ at this time. The first song he learned? “Yes! We Have No Bananas.”

3. Cole formally studied both jazz and gospel music and participated in the music program at Chicago’s DuSable High School before dropping out while still a teenager to become a professional musician. His brother Eddie played bass in Cole’s first band.

5. He shortened his stage name to Nat Cole. Nobody knows exactly where the “King” nickname came from, but most think it was a play on the nursery rhyme “Old King Cole.”

6. Cole left Chicago to tour nationally as a pianist with Broadway musician Eubie Blake. When the tour went bust in California, Cole decided to stay there permanently. 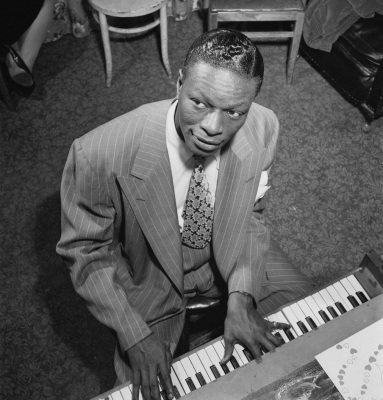 7. He settled in Long Beach, Calif. and formed the King Cole Swingers. The band had a steady gig at The Pike playing for $90 a week.

9. It was in L.A. that he first starting singing regularly as part of his show (at the audience’s insistence).

10. But throughout the 1930s and early ’40s, he was chiefly renowned as a jazz pianist, even playing at the first Jazz at the Philharmonic in 1944 (recordings credit him as ‘Shorty Nadine,’ a tribute to his wife).

11. Cole has been credited with being among the first bandleaders to use a trio of piano, guitar and bass at a time when big bands held sway. This combo would also be used by jazz heavyweights like Art Tatum and Oscar Peterson as well as blues artists like Ray Charles.

12. His first popular hit came in 1943 with “Straighten Up and Fly Right,” a song based on an African-American folktale Cole’s preacher father often referred to in his sermons. The recording is often considered a precursor to rock ‘n’ roll.

13. When he began to emerge as a singer, he dropped the jazz trio format and instead was backed by a string orchestra when recording. Some jazz purists accused Cole of selling out, but he would continue to occasionally record and perform “pure” jazz well into the 1960s.

14. Among his early hits was “The Christmas Song,” written by Mel Tormé and Bob Wells (oddly enough, the song was written on a hot summer day). Cole picked the song over the objections of Capitol Records and recorded four different versions between 1946 and 1951. It was the second version that became a big hit.

16. Ten years later, he became the first African American to host a national television program with “The Nat King Cole Show.” The show ran for a year but failed to find a sponsor, a development Cole blamed on racism. He was to said to have remarked, “I guess Madison Avenue is afraid of the dark.”

17. Cole refused to play segregated venues (and in fact refused to play anywhere in the South after he was assaulted onstage by white supremacists in 1956 at a show in Birmingham, Alabama), sued hotels that refused to lodge himself and his band, and insisted on living in a then all-white section of Los Angeles amidst threats from the local Ku Klux Klan.

18. Despite all this, he was sometimes criticized for not contributing more to the civil rights movement.

20. Cole was a frequent guest on other shows, appearing on “The Pat Boone Chevy Showroom,” “Your Show of Shows,” and “The Jack Benny Program.” He appeared six times on “The Ed Sullivan Show.”

21. Cole also enjoyed a career on the big screen, appearing in 22 feature films—including an uncredited cameo in Citizen Kane (he is shown playing piano, his back to the camera). His last film was 1965’s Cat Ballou, starring Jane Fonda and Lee Marvin.

22. Cole was a heavy smoker throughout his life, smoking up to three packs a day in his belief that it helped keep his voice sounding low and smooth.

24. His final album, L-O-V-E, with its classic title track, was recorded just a few months before his death and released posthumously.

25. His daughter, singer Natalie Cole, recorded a version of his signature song “Unforgettable” as part of a tribute album in 1991. The album won seven Grammy Awards.