Half a century after Rachel Carson’s death, her work toward a cleaner environment still resonates.

In the 21st century, we know a lot about the dangers of pesticides. We haven’t stopped using them altogether, but we’ve become more mindful of them, especially as they affect our food. Lists of the “dirty dozen” foods most likely to transmit environmental poisons into our bodies circulate around the Internet and parents’ groups, and more and more, we seek out organic foods to avoid chemical contamination. We think twice before spraying our own gardens, and we look for natural insect repellents, especially to use on our children.

But there was a time, not so long ago, when pesticides were considered a magnificent technological advance, allowing us to live without the annoyance of bugs, grow bigger and stronger crops, and prevent insect-borne diseases. 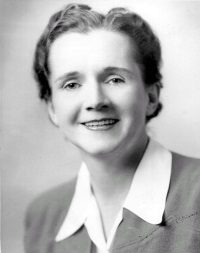 Rachel Carson changed all that.

Her 1962 book “Silent Spring” sounded the alarm about pesticide use, connecting it to the deaths of animals and birds, and even humans. Chemical companies, she claimed, knew of the dangers of these pesticides, but didn’t share that information with the public, touting their products as miraculous technology that was nothing but beneficial. She advocated for much more responsible use of pesticides, especially the then-common DDT.

At another time, in another political climate, the book might have been ignored. There’s no counting the environmental alarm-raisers whose pleas have fallen on deaf ears, or preached to the choir with no impact outside the conservation community, or not been read at all. But in the 1960s, many in the U.S. were already concerned about environmental damage, and they were ready to act on information like what Carson gave them. President Kennedy called for further investigation of Carson’s research, and when her findings were confirmed, he passed legislation strengthening restrictions on chemical pesticides.

“Silent Spring” changed the world, but it didn’t lead to a complete sea change in our attitudes toward pesticides. They’re still used – from the spray that blankets agricultural fields to the insect repellent we spritz on before an outdoor party. In many ways, Rachel Carson would probably be proud of the progress we’ve made toward understanding the dangers of pesticides – but she’d likely also see that we have a long way to go.