A lot of musicians have played the Grand Ole Opry since it was founded in 1925.

This month, as the Grand Ole Opry celebrates its 85th anniversary, we look back at its history and a few of the musicians who have graced country music’s most famous stage.

On Oct. 18, 1925, Nashville radio station WSM premiered a program featuring “Dr. Humphrey Bate and his string quartet of old-time musicians.” Not long after, George Hay was hired to bring his National Barn Dance radio program from Chicago to Nashville. The two programs combined to form the WSM Barn Dance, and a legend was born.

“Barn Dance” was a great name for a program featuring music by the likes of the Fruit Jar Drinkers and the Binkley Brothers’ Dixie Clodhoppers, but it didn’t last long. The program typically aired just after an hour of classical and opera music. One day, Hay — the early Opry host who would later be known as the “Solemn Old Judge” — quipped, “For the past hour, we have been listening to music taken largely from Grand Opera. From now on we will present the Grand Ole Opry.”

Over the years, the Opry has weathered many changes and a few hard times — it’s gone from a radio-only program to one with a live audience, to television, traveling concerts, a theme park, and more. It’s moved from stage to stage and recently endured a devastating flood. Throughout, the Grand Ole Opry has remained committed to showcasing the best of country music. The list of Grand Ole Opry members — those who perform regularly, often weekly, on the stage — has included country music’s biggest names, from legends like Patsy Cline, Hank Williams, Johnny Cash, June Carter Cash, Dolly Parton, and Loretta Lynn, to current stars like Carrie Underwood, Reba McEntire, and Garth Brooks.

But the Grand Ole Opry isn’t just about superstars. At the heart of the show has always been good old country music, and the musicians who make it aren’t always household names. Here are a few folks who may never have made it big, but were a big part of making the Grand Ole Opry the legend it is today.

Hal Rugg was a member of the Grand Ole Opry’s staff band from 1963 to 1979. He was a steel guitar player, and while his name isn’t on the lips of every country music fan, it’s legend to other steel players. A member of the steel guitar hall of fame, he backed artists like Barbara Mandrell, Ronnie Milsap, and Joan Baez. Maybe even more satisfying to Rugg, his innovative playing influenced younger musicians who still strive to emulate his style today.

Here’s Hal on pedal steel along with fiddler Buddy Spicher:

The McKinney Sisters were pioneers of western swing music who played the Opry stage with Eddy Arnold and toured with the legendary Bob Wills and his Texas Playboys. The sisters began their singing career on an Alabama radio show during the Great Depression when Evelyn was 12 and Dean was 14, according to obituaries published in the Sacramento Bee. Eventually the sisters settled in Sacramento with their husbands; Dean married electric mandolin player Tiny Moore and Evelyn married bandleader Billy Jack Wills, brother of Bob Wills. Dean and Evelyn released albums of sacred music and were active in the Sacramento chapter of the Western Swing Society. Martha Dean McKinney Moore died Nov. 9, 2009, and younger sister Margaret Evelyn McKinney Stevens followed two years later on Dec. 24, 2011. 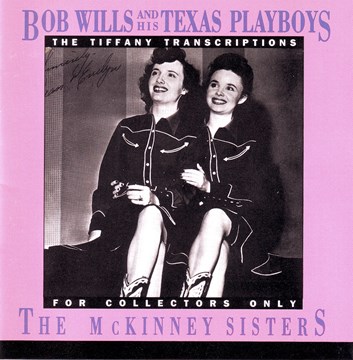 You can hear Dean and Evelyn join in on the chorus of this classic track:

Peanut Faircloth was a man of many talents: primarily a popular country music radio disc jockey, he was also a gifted musician who sang and played harmonica, drums, mandolin and guitar… as well as writing music. His Hoedown Party radio show was heard on more than 300 stations, and he was one of Elvis Presley’s earliest fans and supporters. Peanut played on the Grand Ole Opry stage, fulfilling the dream of many a country music fan, and performed with big names like Roy Acuff, Patsy Cline, and Loretta Lynn. He even invented a musical instrument — the “flushaphone,” a toilet plunger with holes punched in it, which he happily played.