A glance at the Kennedy family tree reveals one of the most remarkable clans in American history.

John F. Kennedy may have ascended higher in our nation’s political system than any other member of his family, but many other Kennedys were just as noteworthy as he was. A glance at the Kennedy family tree reveals one of the most remarkable clans in American history.

First of JFK’s line to be born in the U.S. was his grandfather, P.J. Kennedy. The son of a farmer, he became the first Kennedy to receive a formal education and was elected to the Massachusetts House of Representatives and State Senate. His son, Joseph Kennedy Sr., was a powerful businessman who served as U.S. ambassador to the United Kingdom and was father to nine children, many of whom would become legendary figures of American public life.

There was JFK, the young president who energized a generation. His older brother, Joseph Kennedy Jr., was poised for political superstardom before he died in action during World War II. Younger brothers Robert F. Kennedy and Ted Kennedy served illustriously in the U.S. Senate. Sister Eunice Kennedy Shriver founded the Special Olympics, and son JFK Jr. was an attorney with a career to watch as he founded the politics magazine George.

No less notable were the in-laws, from JFK’s poised and much-admired wife, Jacqueline Kennedy Onassis, to his brother-in-law, Sargent Shriver, who helped carry out JFK’s vision of creating the Peace Corps.

The next generations carry on the Kennedy tradition of public service and noteworthy achievements, as they serve in political office, work in film and journalism, change the world as activists, and more.

Read more about the Kennedys and test your knowledge of the family’s legacy with these stories, obituaries and trivia quizzes. 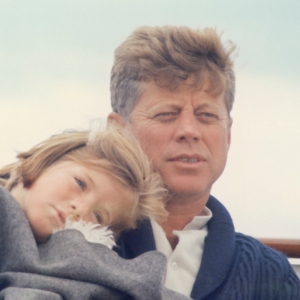 Imagining JFK Alive. The day President John F. Kennedy was assassinated — Nov. 22, 1963 — is a day we all know about in great detail … yet nobody really knows the full story. Theories abound, from the reasonable to the bizarre, as generations have tried to figure out who killed JFK and how they did it. Just as tantalizing is speculation about how different our world might be had Kennedy lived. Stephen King succumbs to this temptation in his new novel, 11/22/63. Read more

Robert Kennedy: Icon of Hope. While the death of President John F. Kennedy is often seen as the symbolic moment when the nation lost its post-war afterglow and plunged headlong into the tumult of the 1960s, it was also a time when America came together as a nation in mourning. The assassination of President Kennedy’s younger brother Robert less than five years later, however, seemed another terrible sign that the nation was falling apart. The despair, confusion and anger spawned by his death have diminished with time, and now Robert Kennedy is remembered as an icon of idealism who still inspires 85 years after he was born. Read more

Edward M. Kennedy. In nearly 50 years in the Senate, Kennedy served alongside 10 presidents — his brother John Fitzgerald Kennedy among them — compiling an impressive list of legislative achievements on health care, civil rights, education, immigration and more. His only run for the White House ended in defeat in 1980. More than a quarter-century later, he handed then-Sen. Barack Obama an endorsement at a critical point in the campaign for the Democratic presidential nomination, explicitly likening the young contender to President Kennedy. To the American public, Kennedy was best known as the last surviving son of America’s most glamorous political family, father figure and, memorably, eulogist of an Irish-American clan plagued again and again by tragedy. Read more

The Real Jackie Kennedy. Her style and grace were legendary, and her image came to define the 1960s. She captured the hearts of world leaders, fashion icons and people all over the planet, who knew her as Jackie Kennedy, Jacqueline Onassis, or simply Jackie O. But who was the real Jacqueline Lee Bouvier Kennedy Onassis? Read more 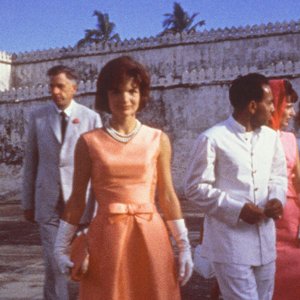 The Jackie Look. When the Kennedys moved into the White House in 1961, the First Lady appointed Oleg Cassini as her exclusive couturier, earning him the nickname “Secretary of Style.” He made an immediate splash with the dress he designed for the inaugural ball. That dress was later named one of the “50 Dresses that Changed the World,” and it ushered in an era of breathless admiration — and frequent copying — of Cassini’s designs for Kennedy. Kennedy loved Cassini’s work, both complimenting him and relying heavily on him. As Cassini once reminisced, “All I remember about those days are nerves, and Jackie on the phone ‘Hurry, hurry, Oleg, I’ve got nothing to wear.'” Read more 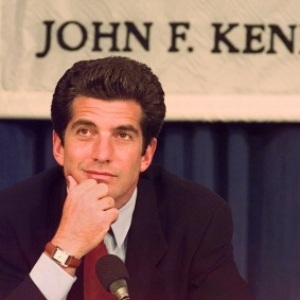 JFK Jr.: A Life in Pictures. From his first days of life, John F. Kennedy Jr. was one of the most looked-at — and most-photographed — people in the world. Born just 16 days after his father, President John F. Kennedy, was elected to the White House, JFK Jr. was a source of fascination to the media and the public. He was a golden child of a powerful political dynasty, a sad but strong little boy who lost his father far too young, a handsome and successful young man, and ultimately, a tragic figure who died even younger than his father. Read more

Rosemary Kennedy. While she spent much of her life shielded from the public eye, her struggles with mental retardation inspired her sister to encourage millions of mentally disabled athletes to publicly celebrate their differences. Rosemary Kennedy’s condition became an inspiration to her younger sister, Eunice Kennedy Shriver, who founded the Special Olympics for mentally disabled athletes, and in 1984 she took over her sister’s care after their mother had a stroke. Read more

Eunice Kennedy Shriver. As celebrity, social worker and activist, Shriver was credited with transforming America’s view of the mentally disabled from institutionalized patients to friends, neighbors and athletes. Her efforts were inspired in part by the struggles of her mentally disabled sister, Rosemary. “We have always been honored to share our mother with people of good will the world over who believe, as she did, that there is no limit to the human spirit,” her family said in a statement. Read more

Sargent Shriver. The handsome Shriver was often known first as an in-law — brother-in-law of President John F. Kennedy and, late in life, father-in-law of California Gov. Arnold Schwarzenegger. But his achievements were historic in their own right and changed millions of lives: the Peace Corps’ first director and the leader of President Lyndon Johnson’s “War on Poverty,” out of which came such programs as Head Start and Legal Services. President Barack Obama called Shriver “one of the brightest lights of the greatest generation.” “Over the course of his long and distinguished career, Sarge came to embody the idea of public service,” Obama said in a statement. Read more