In 1938 an ailing Lou Gehrig set a record that would stand for 75 years. 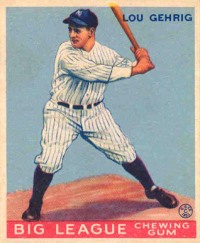 In 1938, Lou Gehrig was having a difficult year. He was weary, a little weak, dragging his feet occasionally. “I tired mid-season. I don’t know why, but I just couldn’t get going again,” Gehrig explained. The Yankee’s stats were starting to sink (though they were still good – even as he slowed down, he played better than the average major leaguer), and his friends and teammates were noticing a change in him, early signs of the mysterious disease – amyotrophic lateral sclerosis or ALS – that would soon take his life.

And yet, 1938 was the year when Gehrig would set a record that was still standing 75 years later. Despite his worsening illness, despite the weariness that was starting to affect his game, on Aug. 20, 1938, Lou Gehrig hit the 23rd grand slam of his career. No ballplayer was able to match until fellow Yankee Alex Rodriguez finally tied Gehrig in 2013.*

Gehrig’s first grand slam had come 14 years earlier, in the third season of his career. Along the way to his record-smashing achievement, Gehrig also set a record for most consecutive games played (that record stood for 56 years), made All-Star seven times and went to the World Series six, was twice voted American League MVP, tied the record for most home runs in a single game (four), and racked up a host of other records and distinctions.

The season after Gehrig hit his record-breaking grand slam was when the illness that came to be known as “Lou Gehrig’s disease” took baseball away from him. He played eight games in 1939. As the ninth game of the season began, he told his manager he’d stay on the bench, breaking his streak of 2,130 consecutive games. When the announcer told the stadium he’d be sitting the game out, the fans gave him a tearful standing ovation. Gehrig never played another major league game, and he officially retired later in the season.

Gehrig could have been resentful of the disease that ended his career and would lead to his death on June 2, 1941, at the age of 37. Instead, he showed remarkable grace when, at a ceremony retiring his number, he told his fans:

“For the past two weeks you have been reading about the bad break I got. Yet today I consider myself the luckiest man on the face of the earth. I have been in ballparks for seventeen years and have never received anything but kindness and encouragement from you fans.”