More than 65 years after Roswell became the top location in UFOlogy, believers in UFOs have come to be seen as a little… kooky.

More than 65 years after Roswell became the top location in UFOlogy, believers in UFOs have come to be seen as a little… kooky. We joke about probes and little green men, brushing off stories of close encounters as made-up. We may want to believe, but most of us go through our lives safe in the knowledge that we’re the sane ones – and the people who think aliens have visited earth are clearly silly, misguided and delusional. 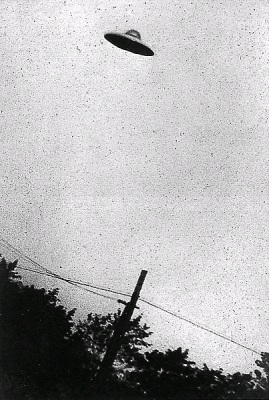 Tell that to Thomas Mantell. He was a WWII ace pilot, honored with the Distinguished Flying Cross for courageous action and an Air Medal for heroism, who continued his military career with the Kentucky Air National Guard. It is believed he was also the first person to die while chasing a UFO.

Mantell was one of four Kentucky Air National Guard pilots already in the air on January 7, 1948, when the men in the base’s control tower saw a strange object in the sky. It hovered for a long time, and then quickly climbed to 10,000 feet. Mantell and his fellow pilots were told to follow it. As the object continued to climb, too high for a human without supplementary oxygen, the other pilots called off their pursuit. But Mantell continued on, determined to figure out what he was chasing.

Mantell never reached the UFO – at 25,000 feet, his plane spiraled into a dive, ending in a fatal crash. Twenty minutes later, the UFO disappeared without a trace. The assumption was that Mantell flew too high and didn’t have enough oxygen to breathe – so he blacked out and lost control of the plane. But according to the sensational headlines in the next day’s newspapers, he had been shot down by “magnetic rays,” or killed by aliens, or fallen victim to the extreme radiation emanating from the UFO.

What really happened at 25,000 feet is something we’ll never know – Mantell took the events of his last minutes to his grave. We can’t say for sure what the UFO was, either. The government explained it as a weather balloon – a new way of explaining away UFO activity at the time, even if it sounds trite today. But without further evidence – unlikely to show up now, 65 years later – we’ll never know if that explanation was legitimate or a government cover-up for something they could explain no better than we can.

The one thing we can say without hesitation is that Thomas Mantell, the first known person to die while investigating a UFO sighting, was no kook. He was a war hero and a well-respected pilot – one who saw something he couldn’t explain and died in pursuit of the truth.